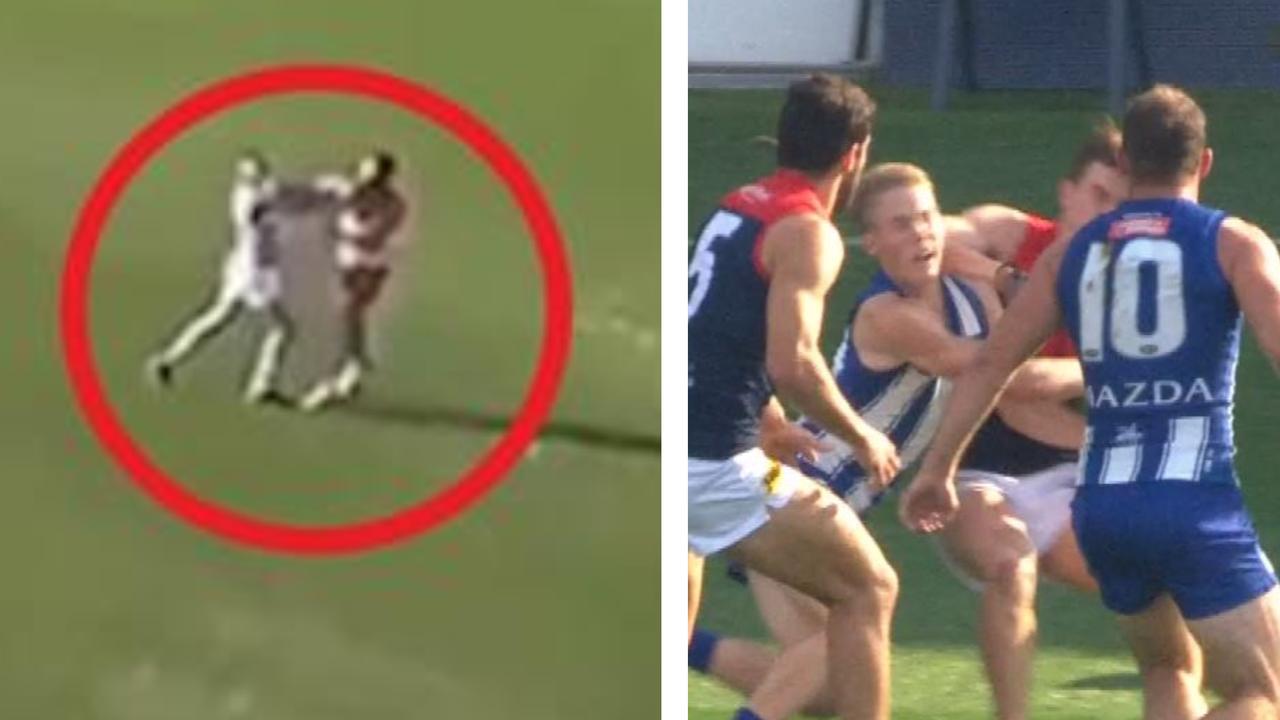 AFL 360 co-hosts Gerard Whateley and Mark Robinson are two of several footy pundits left unsatisfied with verdicts delivered in both the AFL and VFL Tribunal on Tuesday.

At AFL level, Melbourne forward Bayley Fritsch successfully overturned a one-match ban for striking, while at VFL level former No.1 draft pick Paddy McCartin was given a five-week suspension for a sickening strike to the head of Geelong VFL captain Aaron Black.

Reacting to both decisions on Tuesday night’s show, Whateley and Robinson said it was far from a forward step in the battle against head trauma in the game.

“I cannot understand how he got off. I‘m not angry or anything like that I’m just staggered that they could successfully argue that that was not an unreasonable measure,” Robinson said of Melbourne’s successful appeal of Fritsch’s ban.

“There’s a few things that we’ve got to trust in the game. It used to be a lot in shepparding. I’ll go and sheppard you but I’ve got to trust you immeasurably that in the last split second you don’t lift your elbow and break my jaw. That used to happen a lot, not maybe the jaw injury but that action.

“When a young fella is going in to lay a tackle, you’ve actually got to have a sense that the opposition player is not going to put up his elbow as part of his actions or body movement or ball movement. And that’s exactly what happened. I’m staggered he got off.”

Robinson urged the league to appeal the tribunal’s decision, warning that by not doing so it would be making the wrong statement to players across all levels.

“The AFL is ordering all country leagues to monitor their players, they’re ordering 12 day sit downs for all players, we’ve got potential and actually forthcoming legal action against the AFL and the AFL is going to sit here tonight and say, ‘We like the fact that you elbowed him in the head when you didn’t have to put up your elbow and you put it up, and everything’s OK.’

“That doesn‘t sit comfortably with me.”

McCartin’s five-match suspension was another source of frustration for Whateley and Robinson.

The VFL Tribunal pushed for a six-week suspension for McCartin, who apologised in a video posted on the Sydney Swans website on Tuesday, before the final verdict was that the 24-year-old would miss five games.

North Melbourne premiership player David King, who has long advocated for the league to increase its penalties for incidents relating to head trauma, said five weeks was a “bargain” for McCartin.

The Fox Footy analyst said those who made the decision to give McCartin just five weeks should “either take concussion seriously or vacate your role”.

Carlton AFLW coach Daniel Harford was another who was shocked by the decision.

Whateley said the decision was a poor one given the emphasis on protecting the head.

“That’s light. That action is an eight-week suspension in the game and we‘ve had a couple of precedents to reinforce that,” he said.

“The fact that Aaron Black didn’t end up with a broken jaw, concussed or in hospital is simply good luck or good management.

“That one action, the blatant punch, I did think we’d got to a point where you go eight weeks.”

Robinson, also “surprised” by the penalty, said McCartin, who cited low blood sugar as a type 1 diabetic as one reason for his agitation, had to reconsider whether he could trust himself to keep his cool in the future.

“I think Paddy McCartin has to ask himself, and I’m sure he has, I’m sure he hardly slept last night, he knows that he has done the wrong thing,” he said.

“He’d be lying in bed thinking ‘What have I done, what have I done yet the whole footy world in his corner all through his battle – he lost a lot with what he’s done.

“He has to ask himself some serious questions about his mentality. Should he actually play the game? If he’s going to react like that I don’t think you should be playing the game.”