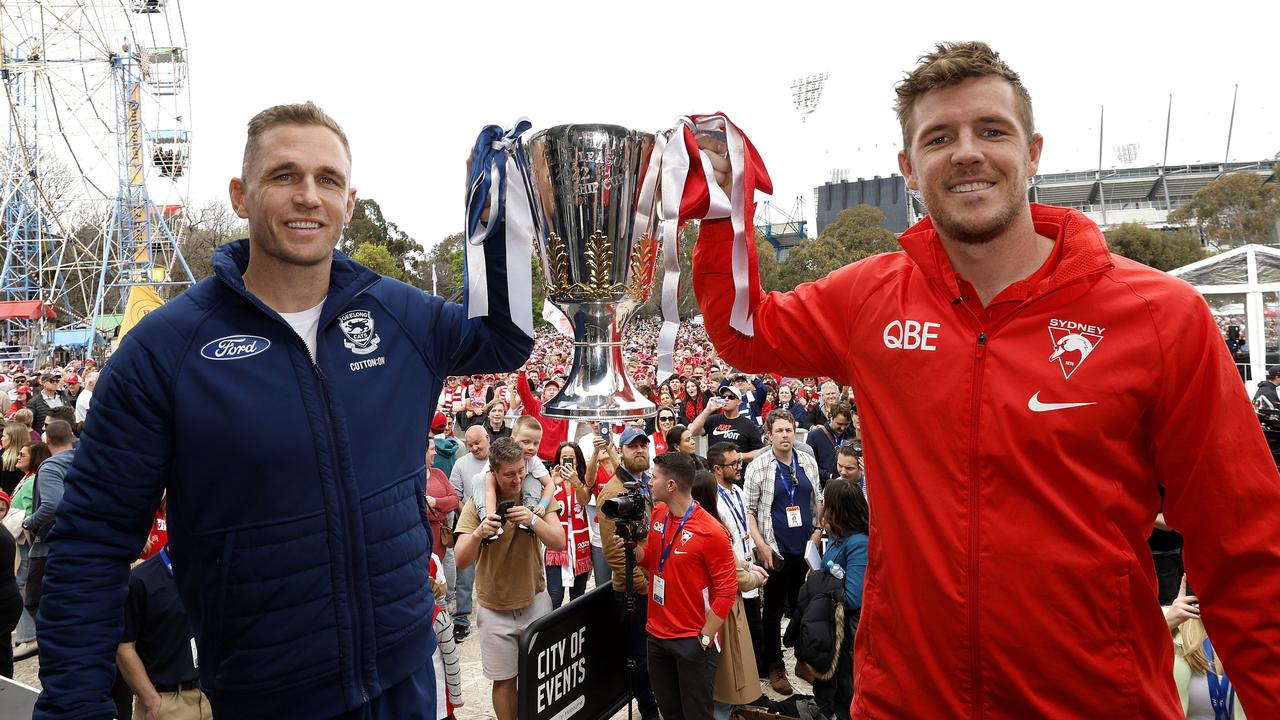 The best and most in-form teams in the AFL will collide on Saturday as Geelong takes on Sydney at the MCG.

And even though the red-hot Swans enter the match with a nine-match winning streak, the Cats have been emphatically backed to win their 10th AFL premiership.

Watch every match of the AFLW Season LIVE on Kayo. New to Kayo? Start your free trial now >

Premiers: Geelong by 9 points — “They were the best team of the season by winning two matches more than any other team. And their form has not dipped.”

Premiers: Geelong by 12 points — “They’ve been the best team all year and there’s a sense of destiny that Chris Scott will lead them to another flag.”

Premiers: Sydney Swans by 14 points — “Geelong is hard to fault and deservedly favourites, but the Swans in my opinion are the best team in the league at taking away your strengths as a team. If they can take away Geelong’s weapon, they win — and I think they can!”

Premiers: Geelong by 15 points — “Hard to go past them. Had both tight and thumping wins on the lea- in which should set them up nicely. The management of bodies throughout the season also looks to have them in the box seat.”

Premiers: Geelong, 12 points — “Like they did against the Lions, it will be the Cats’ small forwards who step up with Sydney‘s McCartin brothers doing the job on Cameron and Hawkins.”

Premiers: Geelong by 5 points — “Toss of the coin as the Swans can worry them, but if they can withstand the pressure the Cats should win. I can’t really tip against them.”

Premiers: Geelong by 20 points — “I reckon Patrick Dangerfield will set the tone and have one of the best first quarters in Grand Final history.”

Premiers: Geelong by 11 points — “The best side all year will produce on the game’s biggest stage.”

Premiers: Geelong by 12 points — “Even if the Swans bring pressure, the Cats are too good not to dominate the match for a little while, at least. That should be enough.”

Premiers: Sydney by 15 points – “The Swans’ elite pressure over four quarters, coupled with their dynamic forward line and underrated backline line, will get the job done.”

Premiers: Geelong by 23 points — “I just feel Geelong have larger depth of mature talent who may handle the pressure of the occasion better. Plus Geelong’s ability to generate a spare down back is something many clubs haven’t been able to negate.”

Premiers: Geelong by 4 points — “To be brutally honest, I wouldn‘t be surprised if Sydney won because I think Sydney in the last six weeks have been just about the best pressure team — and in my opinion come Grand Final day, the team that can apply the most pressure for longer win the game. But Geelong has the best side and if they play at their best, they win.”

Premiers: Geelong by 9 points — “Cameron and Stengle the game-breakers despite Sydney’s pressure turning this into an old-fashioned scrap.”

Premiers: Geelong by 12 points — “There’s something different about this Geelong outfit. A professionalism we haven’t seen from a team since probably the Hawks of 2015. They’ll be able to adapt to the conditions and tempo of the game with aplomb and be too classy when it matters most.”