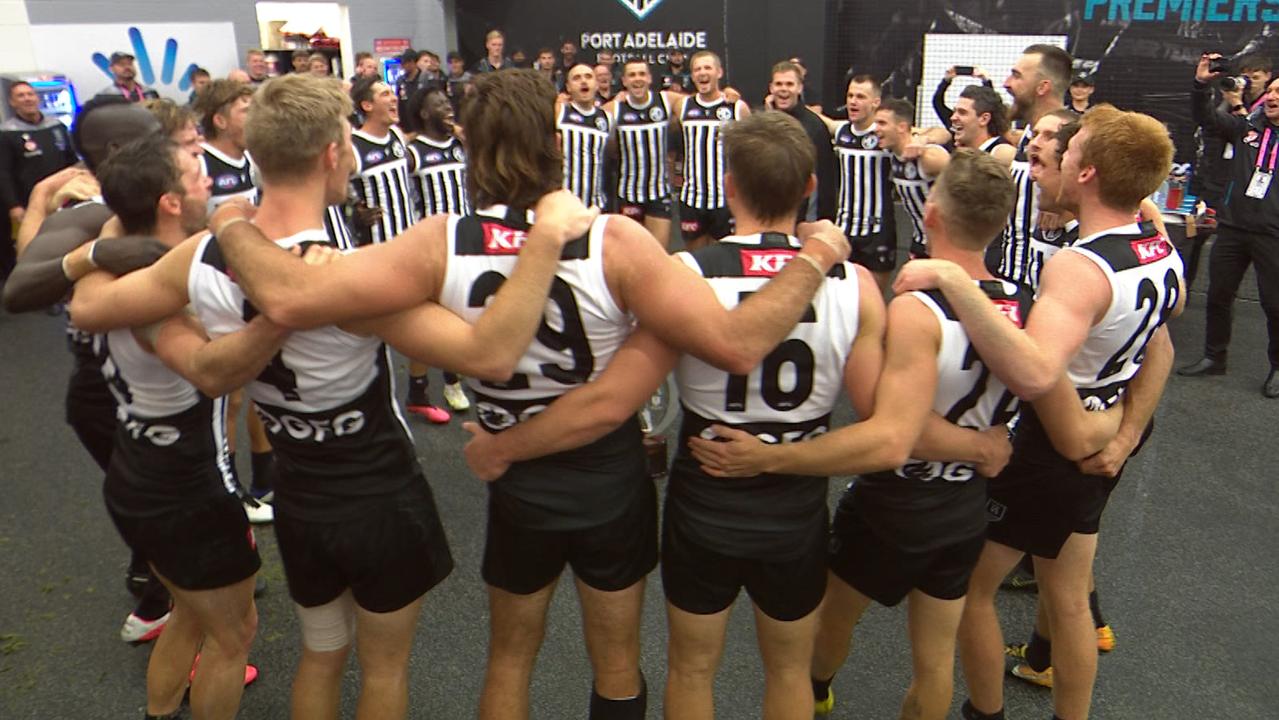 This is as cheeky – and shrewdly executed – as it gets.

After being barred from wearing their Prison Bar jumper for the Round 8 Showdown, Port Adelaide on Saturday night gave its critics a giant middle finger, donning the famous outfit to sing the team song after defeating Adelaide by 49 points

The Power have launched a ‘bring back the bars’ campaign in an attempt to link the club’s past with its present and future.

However the AFL disallowed Port from wearing its black and white-striped jumper for Saturday night’s Showdown, with the league citing agreements between the league, club and Collingwood.

Port president David Koch also claimed the AFL threatened to dock the club premiership points if it did.

So the Power, who beat the Crows while wearing the V-shape pattern jumpers, waited until they were off the field to change into their Prison Bar strips and sing the team song.

“It’s a big statement. Do Collingwood know about this?” Brown told Fox Footy.

Dees champion Garry Lyon: replied “I’m sure they don’t – and I think that’s the way they (Port) would like it!”

“There’s a bit of a statement in all this.”

Port Adelaide coach Ken Hinkley said it was an important moment for his club.

“Part of that journey is this amazing jumper which the boys love and the club loves and every one of the people who support this footy club love it. We had to wait until after the game but we‘ll recognise it as often as we have to.”

Power star Travis Boak, who won his third Showdown Medal, said the move signalled the importance of the historic strip.

“This guernsey means to so much to our community, to our footy club, to everyone who represents it, everyone who‘s played in it and everyone who has been around the club and certainly the players as well. To sing the song in this guernsey is special and we were able to do that tonight and that was planned,” Boak said.

“If we came off winning we‘d sing it in this guernsey and show our fans that it means just as much to the players as it does the community and it was a great moment.”