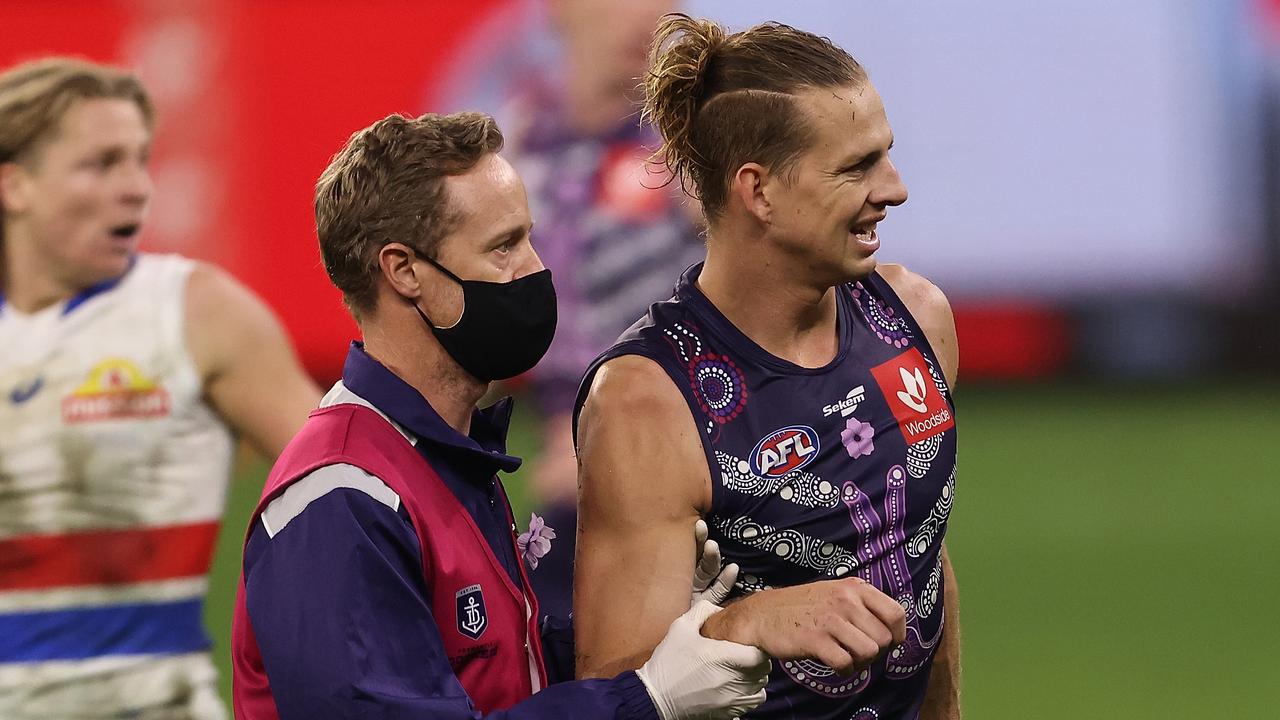 Injured Fremantle skipper Nat Fyfe could make a shock return against Collingwood in Round 15 despite dislocating his shoulder last weekend.

Fyfe came from the field in the fourth quarter of his side’s loss to the Western Bulldogs at Optus Stadium last Sunday with his shoulder out of its joint, creating fears that his season could be over.

But the star midfielder has avoided surgery in a big win for Fremantle. And while Fyfe won’t play against Gold Coast this weekend, Dockers coach Justin Longmuir confirmed to reporters on Friday that he was hoping to “play out the year”.

“We feel like he‘ll be able to play out the year,” Longmuir said.

“He‘s got to get some strength back in his shoulder first so we don’t put it at further risk of damage, but we’re pretty confident he can play out the rest of the year.

Asked on a timeline of when Fyfe could return, Longmuir said: “We‘re hoping ‘Fyfey’ will be right for the Collingwood game. Fingers crossed for that. He will have to improve a fair bit.”

The dual Brownlow medallist has a history of shoulder injuries, previously undergoing latarjet surgery on his right shoulder.

The Dockers have a bye next week before meeting the Magpies the following weekend, with veteran midfielder David Mundy to captain the club against Gold Coast in Fyfe’s absence.

The skipper was one of many Fremantle casualties in the Bulldogs clash, with Griffin Logue (concussion), Sean Darcy and Brennan Cox (both hamstrings) all getting struck down and unable to complete the match.

Logue and Cox will both join Fyfe on the sidelines this week — allowing Alex Pearce to return to the side — while Darcy has surprisingly been cleared to play after scans revealed no damage to his hamstring.

The Dockers will also be without Matt Taberner (ankle) for a third-straight game, who was a late scratch against the Dogs. Longmuir explained that he wasn’t fully fit and playing him now was too big a risk.

“It clearly hasn‘t come along as quick as we’d like,” Longmuir said.

“He‘s got no pain but he’s lacking a little bit of strength, and really we feel like if we play him we’d be putting him at long-term risk.

“With the bye coming up, that ankle not being 100 per cent right and the risk to his long-term ability to play in the back half of the year, we just thought it was a risk not worth taking.”

The Dockers, who currently sit 11th on the ladder with a 5-7 record, will unearth two debutants against the Suns in Brandon Walker and Joel Western.