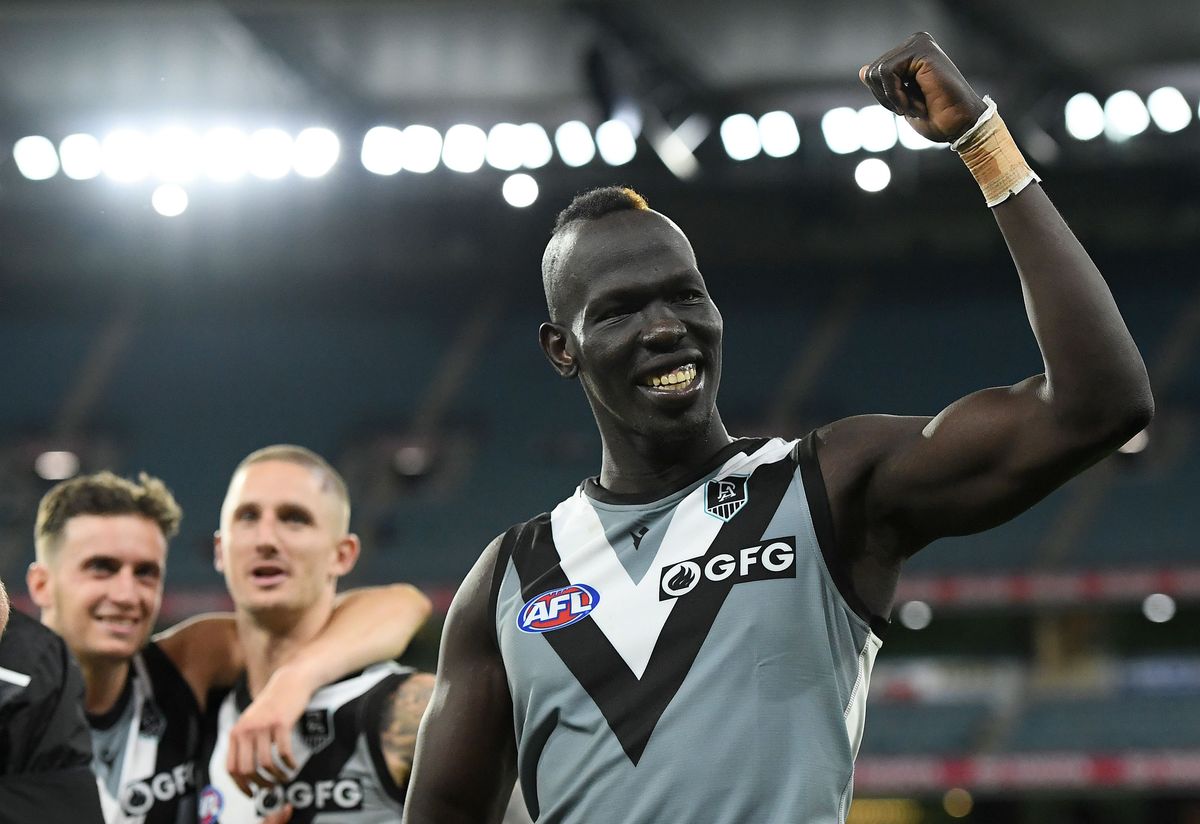 WHEN Port Adelaide approached Aliir Aliir last year to make a move from Sydney, its pitch centred around one thing: they wanted him to play purely as a key defender, believing in his ability to stop the AFL’s biggest and best forwards.

This week, in Saturday night’s Showdown against Adelaide, Aliir looks set to be tasked with shutting down the Crows’ Coleman Medal leader Taylor Walker.

Aliir’s move after seven seasons at the Swans took shape quickly, but he has just as fast become one of the Power’s most important players in the club’s push for this year’s flag.

“It came up late. I was in the hub with the Swans and personally I didn’t think I was playing that well. My manager rang me and said ‘Port are interested’ and I wasn’t sure how to take it,” Aliir told AFL.com.au.

“I knew I was contracted for another year and when the season finished he rang me again and said ‘Mate, they’re very keen’. From there it was just a matter of talking to the Swans because I was still contracted. It was talking to both clubs and we were able to come to a deal. It sprung up late. I was at the Swans for seven years and it was hard at the start, you’ve gone to a place you’ve never been before.

“I think I’d only been to Adelaide twice for games here and then it all happened but it’s been a great move so far and I’m playing some alright footy and I’m in good shape.”

With a year left on his deal at Sydney, a trade was arranged that allowed the Swans to secure ruckman Tom Hickey, who has been a central part of the club’s improved performances so far in 2021.

Despite his struggles with form, Aliir had not considered asking to be traded through last season but Port’s approach to help bolster their key defensive stocks planted a seed in his mind about the opportunities of a change.

“What Port were able to say to me was that they wanted me to play as a key position player down back and if anything happened – I knew they had a lot of ruck stock – but in the ruck if they needed me I could still do that or up forward. But I’ve played my best footy down back and I feel like I read the game very well and provide the run and carry out of defence and when Ken [Hinkley] spoke to me about that it made me want to make the move.”

Port’s performances last season also made the change appealing after last year falling a goal short of a Grand Final berth and entering this season as a flag fancy.

“That’s why I was surprised too. They were a top-four side and they were coming after me to come here so I think that made the talks even better for a club who was in the top four to come and get me because they think I can add value to the club made me want to come here even more and work extra hard to earn my position in the team,” the 26-year-old said.

After acclimatising to the change of pace from Sydney to Adelaide cities, Aliir will get his first taste of the crosstown rivalry on Saturday night at Adelaide Oval. Although he is yet to face the Crows in a Showdown, he has been told what to expect, with the Power keen to rebound after last week’s thrashing to Brisbane.

“The boys have mentioned a few stories here and there and we plan on going out there and give them everything. They hate us and we hate them just as much. We played two games against them in the pre-season but I don’t think that’s the same,” Aliir said.

And Aliir will likely take on the job of limiting in-form Crows forward Walker, who has booted 27 goals in the first seven rounds. The assignment is precisely why Port Adelaide recruited him.

“I was on him when we played them in the pre-season games so I’m assuming I’ll be on him. The talls will share the load again as usual. We’ve been working very well together as three talls and TJ (Tom Jonas) there so I think it will be the same thing again. He’s in great form,” Aliir said.