Carlton is slowly but surely working out what its starting midfield unit looks like on a game by game basis after making a big tweak that has been key to their two-game win streak.

When it comes to centre bounces, teams have various strategies with who they send in, with some having a set group of four who do the bulk of the work and others sharing their load.

West Coast for example sends Nic Naitanui, Elliot Yeo, Tim Kelly and Luke Shuey to over 60 per cent of their centre bounces. The Bulldogs, similarly, used Tim English, Marcus Bontempelli, Bailey Smith and Jack Macrae even more exclusively on the weekend in the absence of Josh Dunkley.

Other teams however have a more scattergun approach. GWS wants their ruckman, Matt de Boer and Jacob Hopper in at the majority of centre bounces, but mixes in Stephen Coniglio, Callan Ward, Josh Kelly and Tom Green through as the fourth man pretty evenly.

Of course, these numbers all vary from week to week and situation to situation as well.

Carlton is a fascinating study in centre bounce attendances as it shows a clear trend and a three-way battle emerging for time on-ball.

Across Rounds 1 and 2, Carlton was set. Patrick Cripps and Ed Curnow would do the vast majority of the work at centre bounces (well over 90 per cent of it), while Marc Murphy would take the third spot close to 70 per cent of the time.

Zac Fisher filled the remaining 30 per cent, with Sam Walsh and Jack Martin both sprinkled in.

The only change in Round 2 saw Will Setterfield receive the injured Fisher’s time on-ball.

Sitting 0-2 and needing to make some changes, Carlton drastically shook up that final rotation in Round 3.

Once again, Cripps (26) and Curnow (26) did the vast majority of the work next to Marc Pittonet (24), but suddenly the Blues turned to Martin as the final member of the midfield team.

After attending six centre bounces total across the first two rounds, Martin found himself in at 21 of 27 against the Cats. Setterfield filled in for five and David Cuningham snuck in for two.

Martin picked up two centre clearances for the game – Cripps finished with seven, Patrick Dangerfield three and no one else in multiples.

However, clearly the Blues were impressed with Cuningham’s brief time in the middle, rewarding him with six centre bounces in Round 4 against Essendon.

He had a breakout night, finishing with 28 disposals and one centre clearance.

Essendon did a fantastic job at stopping Cripps in the middle of the ground, with the co-captain not winning a single centre clearance all night. Instead, it was Pittonet with four and Setterfield with four who did the damage.

Cripps still attended 16 of 18 centre bounces, while Curnow attended 15/18, the latter spending most of the night closely tagging Dylan Shiel.

Martin spent more time inside 50, attending six centre bounces, while Setterfield received seven, Walsh three and once again Murphy only had the one.

The Blues have clearly moved away from Murphy in the middle, instead pushing him out onto the wing opposite Walsh as the two former number one draft picks do their best work on the outside.

It’s clear that Martin, Setterfield and Cuningham have been given Murphy’s snaps (to use an NFL term) and all three have shown they deserve the time in the middle.

Martin’s work against the Cats gave Carlton a point of difference and someone capable of getting on the end of the grunt work of Cripps, Curnow and Pittonet.

Setterfield himself stood up when the captain was struggling and got the job done against Essendon, while Cuningham had his career best game spending more time through the midfield.

Credit must go to coach David Teague and stoppage coach John Barker who saw that Murphy wasn’t working as pat of the trio and have dealt out opportunities in order to find his replacement.

Teague was the one who initially threw Murphy back into the middle along with Curnow when he took over as senior coach in the middle of 2019.

Under Brendon Bolton, Paddy Dow, Sam Petrevski-Seton and Zac Fisher did the brunt of the work alongside Cripps, while Murphy and Curnow spent time on the wings or inside 50.

Come the end of Round 7 of 2019, Fisher (102), Dow (95) and Petrevski-Seton (83) dwarfed Murphy (15) and Curnow (7) for centre bounce attendances. Now, Petrevski-Seton is used exclusively across half back and the other two are injured, but have spent more time forward under Teague.

This centre bounce exposure was part of developing their top draftees and accelerating their growth, but it came at the expense of competitiveness – something that Teague immediately addressed.

They have attempted to fill that void in the trade period in recent years too, dealing for big fish like Devon Smith, Stephen Coniglio and Shiel.

Carlton came up empty on those three, but landed Setterfield and Martin regardless, who are now doing the job anyway. They’ve also drafted the likes of Liam Stocker and Brodie Kemp who will eventually grow into those roles if all goes to plan.

Murphy did his job and helped steady the ship in the middle when called upon by Teague, but the likes of Setterfield, Cuningham and the newly acquired Martin are now ready to pick up the slack, allowing the 32-year-old to focus on impacting the game when required.

As he did against Essendon, dominating the fourth quarter and setting up the final two goals of the game with his vision and skill by foot.

This is exactly what the former skipper wants too, as he explained on SEN earlier in the month.

“I’ll aim to try and do that again this year (play on-ball), but the more we can have these younger guys step up and play strong consistent footy, it’s going to help me as well,” Murphy said.

“I need them to step up. I’m sure they are. The way they’ve been training, you mentioned Sam Walsh, he’s only 22 games into his AFL career, but he’s already pretty exciting.

“We need to try and help guys like Patty Cripps as much as we can because we can’t leave too much to too few.”

It’s only four rounds worth of data, but it tells an interesting story about how a young club is attempting to build their midfield of the future.

Carlton will likely get a boost to their on-ball stocks this week, with Fisher overcoming his ankle injury.

How the Blues deal out the centre bounce attendances between Fisher, Setterfield, Martin, Cuningham and Walsh will be something to watch closely on Thursday night against St Kilda.

Another injury setback for Joe Daniher 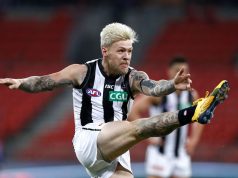