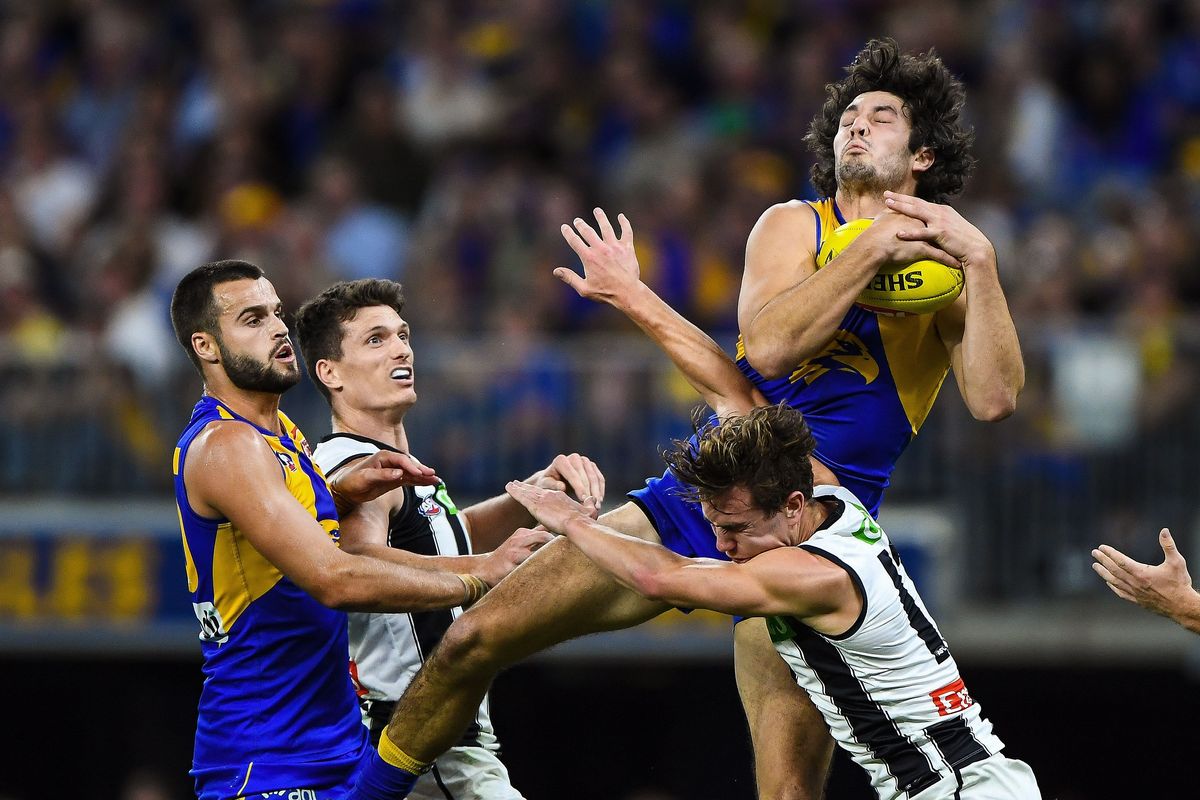 WEST Coast feasted on an injury-hit Collingwood on Friday night, with premiership hero Dom Sheed plunging yet another dagger into the Magpies’ hearts in the 27-point win.

With the game at a crossroads late in the third quarter, Sheed stepped in to boot three goals in two minutes and open up a match-winning 41-point lead that proved too much for the Magpies to rein in during a final-quarter rally.

The visitors were left counting the cost of the defeat, with star forward Jordan De Goey (face) and important defender Jeremy Howe (hamstring) both injured in the first half. Brody Mihocek also spent part of the final term on the bench icing his shoulder.

It was a significant win for the Eagles, who bounced back to form in a big way in front of a packed home crowd of 54,159 – the largest since the 2019 Grand Final after Optus Stadium was opened to 100 per cent capacity.

Dealing with extensive injuries of their own, they showed they have the depth to keep their premiership hopes alive, thriving in the midfield and then dominating through their key forwards.

Jack Darling and Oscar Allen were the stars of the show with five goals each, combining for six goals through the second quarter when the Eagles took charge of the game.

The Magpies used All-Australian defender Darcy Moore in attack, and it looked a savvy move early before he drifted out of the game due to his team’s lack of supply, eventually finishing with three goals.

He was key to the Magpies’ bright start, along with ruckman Brodie Grundy, who booted two goals, but the Eagles lifted their pressure in the midfield and turned the tide in the second term.

They won the contested ball 43-32 for the quarter and went inside 50 16 times to just six as their key forwards put on a show, turning a 15-point deficit into a two-goal lead at half-time.

Tough onballer Jack Redden (37 disposals and six clearances) stepped up in the absence of captain Luke Shuey, while fellow midfielders Andrew Gaff (38 and five inside 50s) and Tim Kelly (28 and seven clearances) had big nights.

Alex Witherden (30 and six rebound 50s) made an impressive debut for his second club in defence, with Jeremy McGovern leading the team superbly with 20 disposals and seven rebound 50s.

Stars sidelined as Magpies feel pinch
The losses of Jordan De Goey and Jeremy Howe were telling blows at both ends of the ground for the Magpies. Howe had started opposed to Oscar Allen in a backline missing the redeployed Darcy Moore and his absence left the defenders exposed, as Allen and Darling combined for six second-quarter goals. Mark Keane battled in aerial contests and Brayden Maynard was forced to play as an undersized key defender. Without De Goey in attack, the Magpies lacked a spark in the second half, going goalless in the crucial third term.

Sheed slams the door shut
There was just under two minutes left in the third quarter when Dom Sheed converted on the run from 50m to make the margin a difficult – but not unassailable – 29 points. The premiership hero added another one minute later, and then plunged the dagger through the Magpies’ hearts with 10 seconds to play, snapping his third goal in rapid succession to open up a match-winning 41-point margin at the final change. Sheed was steady in the midfield, with 28 disposals and seven clearances, but he stepped up in a big way forward when the Magpies were throwing everything at their opponents.

Naitanui fights back in ruck battle
Highly scrutinised this season, ruckman Brodie Grundy made a fast start with two goals and seven disposals in the opening quarter. The impact forward and in the air was what coach Nathan Buckley had wanted to see as the star Magpie caught Nic Naitanui out by drifting forward and getting dangerous. Naitanui got on top thereafter, however, driving the Eagles’ midfield surge and giving his team a 30-22 clearance advantage after quarter-time, winning an equal game-high seven himself.