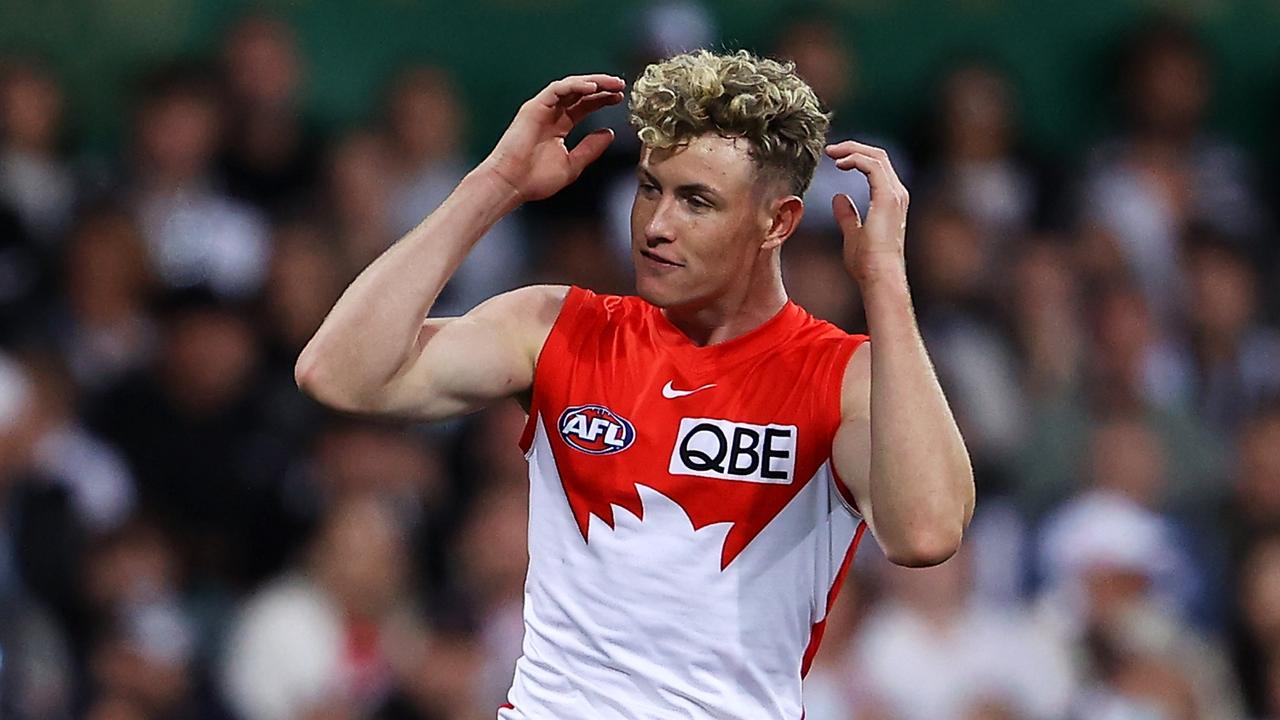 All the Swans’ investigating told them the same thing.

Chad Warner wasn’t a polished product as an 18-year-old – hence him still being available at pick 39 in the 2019 AFL draft – but there was a reason he had Sydney’s attention.

Swans list boss Kinnear Beatson and national recruiting manager Simon Dalrymple saw Warner step up in big moments, whether that be for Western Australia or with East Fremantle.

They saw his insatiable appetite for the contest and some of the power and explosive speed he now displays regularly as one of the game’s rising stars.

But there was more: Sydney’s interviews with Warner’s coaches, teachers and other peripheral people aligned with what the club’s psych evaluation revealed about the then-teenager.

“He wasn’t a stresser or over-thinker,” Dalrymple told News Corp.

“He’s one of those kids who just puts it all out there and doesn’t hold back, which is what you’re looking for.

“Some kids get anxiety and it means they don’t display the traits they showed in the under-18s – the big stage gets to them a bit. It’s something that’s hard to measure, but our information on Chad was pretty consistent.”

Beatson has long been regarded as one of the AFL’s best recruiting minds, having also helped orchestrate Brisbane’s flag three-peat from 2001-2003 before joining the Swans.

More recently, the 65-year-old ascended to the role of Sydney’s list boss, with Dalrymple crossing from the Western Bulldogs at the start of 2018 to head up recruiting.

Together, they have been critical in fast-tracking the Swans’ rebuild with some draft bargains and savvy recruiting, from Warner, James Rowbottom and Justin McInerney to Tom Hickey and Paddy McCartin.

The Swans were basically the only club willing to take a punt on McCartin, the No.1 draft pick in 2014 who found himself out of the league after a series of concussions.

McCartin’s agents, Winston Rous and Scott Lucas, of Phoenix Management Group, initiated discussions with Beatson, setting off a chain of events that paved the way for one of the fairytale stories of this season.

The 26-year-old entered the AFL as a hulking forward picked before Christian Petracca but his rebirth as a footballer was as an intercepting defender alongside his brother Tom, who was also drafted as a forward.

Putting the list puzzle pieces in place is not always an exact science.

In between, Sydney did a huge amount of due diligence on McCartin that involved its own medical staff, external specialists and even the AFL, which had to give the green light for him to even play again.

“It’s such a complex issue and we certainly needed a lot more information from the experts before making a decision,” Beatson said.

“So we went down that path, got clearance for him to play for our VFL team last year, then Covid hit, he got suspended and he did his hamstring towards the end of the year, before the season came to a close.

“But he’d shown reasonable signs up to then and it fell into place that there’d be a chance for him to do the pre-season with us, because he was classified as a delisted free agent and didn’t have to nominate for the draft.”

McCartin is effectively to the Swans what reformed forward Tyson Stengle is to grand final opponent Geelong, another club with a track record of sustained success that Beatson respects “enormously”.

“It’s about looking for where the opportunities lie,” Beatson said.

Admittedly, not every recruiting risk paid off.

Sydney selected Elijah Taylor three picks before Warner in 2019 and he showed enough promise to play four senior games in his debut season but was axed after a domestic violence incident.

Dalrymple remains satisfied with the process that led to Taylor’s drafting, which included various people from chief executive Tom Harley down.

“Sometimes you’ve got to be bold and prepared to take a risk,” Dalrymple said. “But it’s not always going to work.”

Another fateful twist played out around McCartin.

He and veteran Sam Reid battled over the summer for the same defensive role after the latter won one of the final list spots last year.

McCartin came out on top, leaving Reid’s role for this season unclear. Injuries created an opportunity for him to play as a forward again, while also serving as the back-up ruckman.

The 30-year-old’s been a revelation but is under an injury cloud for the grand final with an adductor strain.

When mentioning Reid, you must also bundle in unheralded pair Robbie Fox and Ryan Clarke, who have also been a part of the Swans’ rise from the bottom four in 2019-20 to potential premiers two years later.

“It would be fair to say at the start of the year we hadn’t banked on Foxy, Sammy and Ryan Clarke resurrecting their careers to the level they have,” Beatson said.

“They’ve been fantastic these last couple of months.”

There were other mid-season developments, too. Experienced defender Harry Cunningham’s abdominal strain changed the course of two teammates’ season.

Ollie Florent, who was in a form rut, was sent down back to cover Cunningham, opening a spot for Stephens on a wing after he had struggled to get a look-in.

Meanwhile, Cunningham has played only three times since round 7, while Sam Wicks was playing the defensive forward role that Clarke has snatched and run with after toiling away in the VFL as a midfielder.

It’s all part of the swings and roundabouts of list strategy.

Beatson will tell you how many premiership teams have players who were drafted in different positions to the ones they eventually excelled in, like Chris Johnson at the Lions back in the day.

Dalrymple has operated in largely the same way at Sydney as he did at the Bulldogs.

There’s a balance in everything but he typically avoids chasing players to fit list holes and instead hunts for “elite traits that are transferable”.

That thinking drew Dalrymple to Aaron Naughton and his incredible marking ability, when he was still recruiting for the Dogs. It didn’t matter whether he played in defence or up forward.

Blakey, the No.10 pick in Dalrymple’s first draft at Sydney, started as a forward then played in the midfield, on a wing and even as a relief ruckman before finding his sweet spot as a dashing defender.

But both Beatson and Dalrymple agree that their healthy recruiting strike rate owes plenty to the Swans’ overall environment, just like their Cats counterparts.

There’s the steady hand of long-time coach John Longmire, as well as the commitment to developing players and often making them wait for their senior chance.

“It’s a real credit to John and the coaches and the whole club, in terms of it’s very much seen that we want to compete in finals every year,” Dalrymple said.

“That competitive nature being driven really helps the players develop and they know the standards that must be met.”