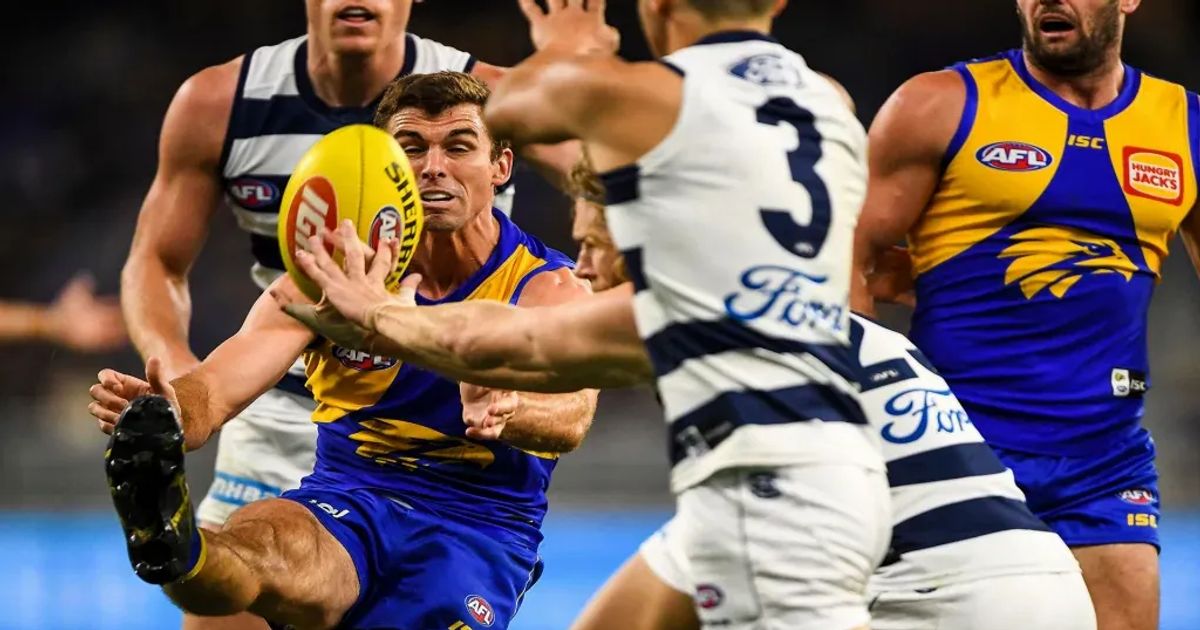 GLOBETROTTERS one week, gritty the next.

Not even a week after bookmakers rushed once-struggling West Coast into premiership favouritism, Adam Simpson’s men had to rally from 22 points down to clinch another victory.

Geelong looked on track for a mighty upset when Zach Tuohy kicked his side almost four goals clear early in the second half, only for the Eagles to slowly wear their rivals down.

New Coleman Medal frontrunner Josh Kennedy proved the difference, booting three of his four majors in a thrilling final term to lead West Coast to an 11.7 (73) to 10.4 (64) win.

>> WATCH THE THRILLING LAST TWO MINUTES IN THE PLAYER ABOVE

It was a worthy follow-up to his seven-goal heroics against Collingwood last week, after which Magpies coach Nathan Buckley dubbed the Eagles the AFL’s answer to the Harlem Globetrotters.

Kennedy took only 16 seconds to kick the first of his goals but barely touched the ball until three-quarter time, with Jake Kolodjashnij, Lachie Henderson and Harry Taylor rotating on him.

He came to life in the last term, getting on the end of a Tim Kelly pass for his second, before brushing off Taylor at a stoppage and crumbing a Nic Naitanui tap to snap truly and cut the Cats’ buffer to two points.

Jack Darling subsequently gave West Coast its first lead since Kennedy’s opener but the game remained in the balance as the minutes ticked away.

Enter Kennedy again. Jamie Cripps opted to put the ball at the top of the goalsquare, with Kennedy timing his jump perfectly to snatch the Sherrin from the air and seal the game.

Dom Sheed was one of the few bright spots for the Eagles in the early going and never relented, while Kelly – playing against his old side – Elliot Yeo and captain Luke Shuey all rose to the occasion.

Geelong was terrific in the opening half and for much of the night, controlling the tempo with expert ball movement and disciplined defence that limited the Eagles’ patented kick-and-catch game.

West Coast averaged a League-most 84 marks in the first eight rounds but had only 27 at half-time and 57 by the end.

Tom Stewart was a leviathan down back for the Cats, who were also well served by the silky skilled Mitch Duncan, superstar Patrick Dangerfield and Zach Tuohy in his new forward role.

Possibly the worst performance I've ever seen from a Crows side. We'll break it down and try to stay positive!