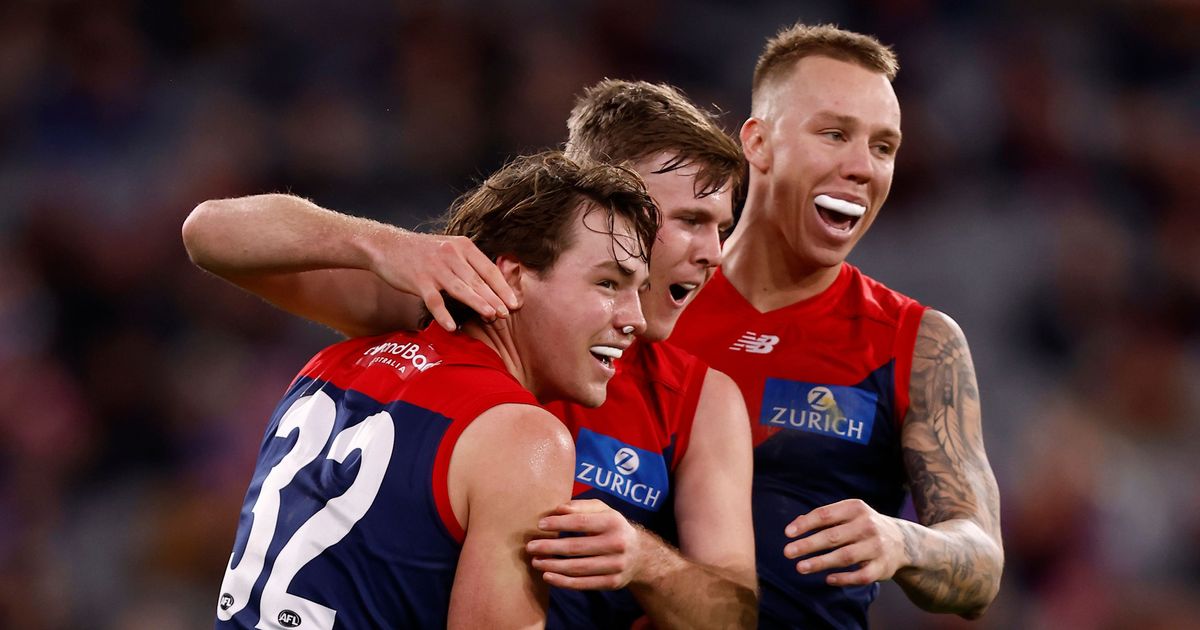 YOU DIDN’T think they were going away that quickly, did you?

Three successive losses, injury problems, board dramas and a bar fight between teammates made for a horror month for Melbourne, but the Demons had a message for the competition on Thursday night: we’re still here.

It wasn’t just a win, either. It was an emphatic percentage booster (and dipper for the Lions) and a show of force that could easily have been a much bigger margin in a reminder Melbourne’s best is still the competition’s benchmark.

The potent performance from the reigning premiers came via a brilliant six-goal-to-one second term that saw them kill off the game and the spirit of their fellow flag hopefuls.

Both teams were weakened by outs – Zac Bailey and Dayne Zorko missing for the Lions, while the Demons were without Max Gawn and Tom McDonald – but the all-round strength of Melbourne won out against a Lions outfit that was several steps off the best.

The return of Steven May was pivotal and also brought out a strong game from fellow defender Jake Lever, while midfield trio Jack Viney (34 disposals), Christian Petracca (31) and Clayton Oliver (35) were too powerful for their Brisbane counterparts. Viney’s toughness was a critical factor in the win (he had 19 contested disposals), while young ruckman Luke Jackson was excellent too in the absence of Gawn.

Brisbane forward Joe Daniher was involved in everything early, setting up the opening goal for the Lions with a crunching tackle on Angus Brayshaw and then having three shots for the first quarter himself. He kicked one of them, helping Brisbane to a six-point lead at the first change in an advantage not indicative of its control of the contest.

The Lions quickly would have been ruing their inefficiency. Melbourne restored some of its high pressure, brilliant game in the second term as James Jordon, Alex Neal-Bullen and Toby Bedford kicked goals, before Jordon slotted another to give the Dees a 22-point break.

Only a late stuff-up from May, whose kick fell into the hands of the Lions and led to a goal to Mitch Robinson, led to Brisbane hitting the scoreboard for the quarter as midfield star Lachie Neale was kept to little influence in the second quarter with only three disposals for the term. A goal to his direct opponent, James Harmes, and then one for Ben Brown saw the Demons take a 30-point break into half-time.

In its past three losses, the Demons were overrun comprehensively in second halves but it was clear they weren’t going to let that happen again this week. They were up for the fight in a tough third term, booting four goals to two to extend the margin to 40 points at the last change to seal the game but there was more to come as they strolled to a convincing win.

Jackson shows why rivals are circling
There’s a reason Luke Jackson’s signature is the most highly sought in the AFL at the moment. Melbourne is understandably desperate to keep him, while Fremantle and West Coast are also in the mix to lure the athletic big man home. Jackson had his hands on the ruck role with Max Gawn missing through his ankle injury and stepped up to the task with an impressive performance against Brisbane. The 20-year-old had 21 disposals, 18 hitouts, nine tackles and booted a classy snap goal in the last term.

Defence trumps attack
Defence wins premierships, offence wins games? It is the old saying that gets thrown about plenty and Thursday night saw a battle of differing styles – the AFL’s best defensive team in Melbourne up against the League’s highest-scoring team in the Lions. It was the Demons’ defence which won out, strangling the Lions’ forward movement and holding them to their lowest score this season. The return of Steven May from concussion and then an internal club ban made a clear difference and he was excellent in the back half, but the Demons had recovered their dogged defensive edge.

Brisbane’s MCG misery continues
If Brisbane is going to be premiers this season, the Lions have to get it done at the MCG, where their poor record extended again on Thursday night. The Lions generally play their Victorian games at Docklands so the sample size is small, but they haven’t won at the MCG since round 21 in 2014 against Collingwood. Thursday was the Lions’ first game at the venue since the opening round of 2020 against Hawthorn, when the AFL season was paused midway through the contest due to the initial spread of COVID-19 in Australia.