Channel 7 is reporting that Sidebottom was in Williamstown on Sunday morning and taken home by police, though he was not charged with any offence.

Sidebottom and teammate Lynden Dunn are currently being investigated by the AFL for a breach of protocols, with the report suggesting the All-Australian midfielder was not in a condition to drive home.

7 News received a statement from Victoria Police on the matter.

“He was not charged with any offence and after speaking to police was conveyed home.”

Neither player will be permitted at Collingwood training until they are cleared by COVID-19 testers.

Yay or Nay: Andy McGrath is going to be just as good as Dylan Shiel?

‘Worry about your own club’: Kane Cornes fires back at ‘ahead of himself’ Damien Hardwick

The moves North Melbourne should have made during Essendon loss 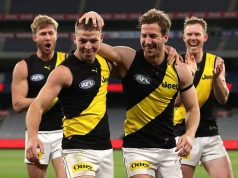