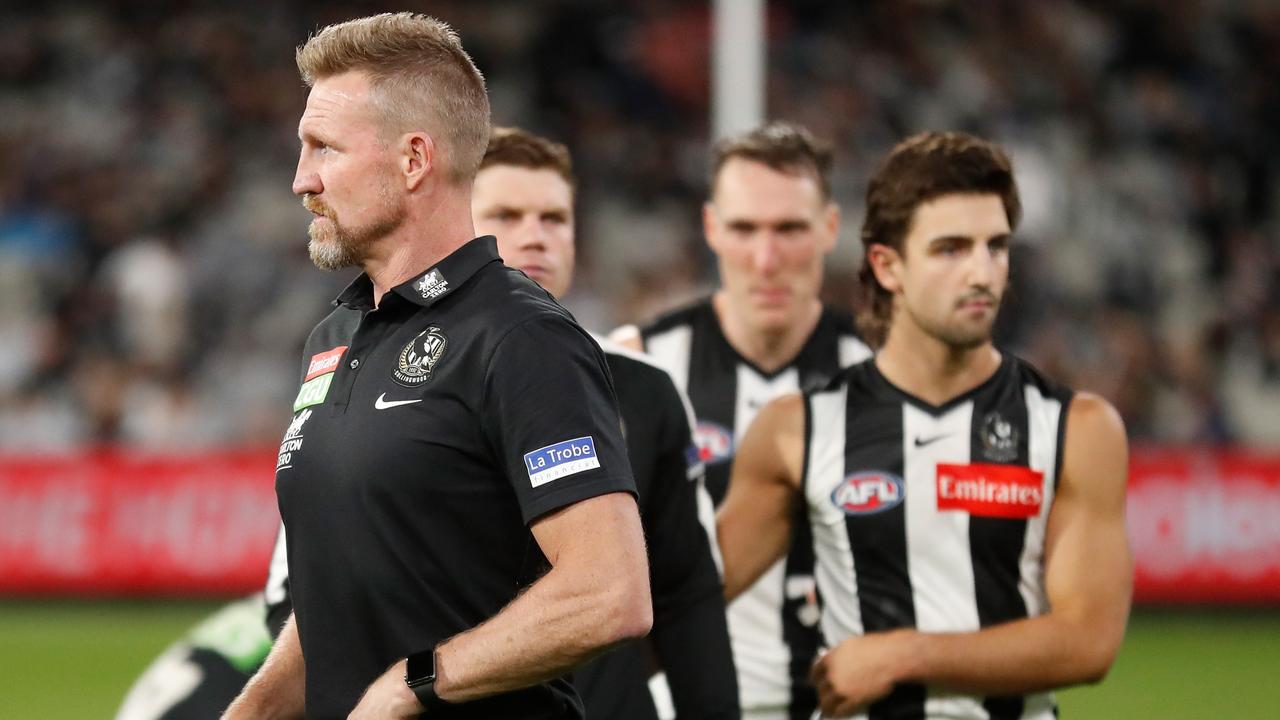 The wheels are falling off at Collingwood Football Club.

There is unrest among some key players towards Nathan Buckley, the coach himself has every reason to be frustrated at the way his team is performing and there is no timeline on when a permanent president will be appointed.

Injuries to Taylor Adams and Jamie Elliott compound the club’s woes — all while Adam Treloar is paid handsomely to represent a rival club for the next five years.

Unfortunately for the Magpies, their current predicament is entirely predictable. As soon as they traded three best 22 players for mid-range draft picks, the central question for 2021 was always going to be whether Buckley could absorb bad results to win another contract.

As every week goes by, his position becomes more precarious. Not because he is a failure of a coach, but because the length of his tenure without a flag naturally raises questions whether the club needs a new voice.

Eddie McGuire’s resignation on the eve of the season added further complications – albeit it helped defuse a complex situation – and left the club without a key figurehead to guide it through troubled waters when they inevitably arrived.

Insiders say Buckley is not the coach he was in 2018 or 2019. That the substantial gains he made after 2017 have been lost amid hub life in 2020 and a rotten start to the 2021 season. This is a shame for Buckley, as much as it is for players and the club.

In 2018 and 2019, one of Buckley’s greatest strengths was how he fostered an emotional connection with players that previously either didn’t exist or wasn’t as prominent. But by the 2021 season, some players had grown weary of the emphasis on emotional connection. It has forced Buckley, Nick Maxwell and others to find other triggers to get the best out of them, which is no easy feat.

Leaders such as Brodie Grundy and Jordan Roughead have been vocal in their frustrations internally, while captain Scott Pendlebury has remained measured and largely distant from grumblings among teammates. Pendlebury has always been an ardent supporter of Buckley, even throughout the Treloar trade affair when other senior players and staff were perplexed by the ‘we don’t want you’ mantra directed at the midfielder.

Like all issues at underperforming clubs, there is more nuance to Collingwood’s issues than Buckley and his struggles to connect meaningfully with the playing group on a consistent basis. He could be forgiven for being out of ideas. Has he lost the hunger? He might deny it, but he would have every right to feel weathered by the events of the last 12 months.

Pursuits of contracted stars Jack Gunston and Zach Merrett were patently unfeasible in last year’s trade period, leaving the club at least an on-baller and a forward short. For the first time in several seasons, Buckley does not have the depth of talent at his disposal.

This is partly his fault of course. He played a central role in giving Treloar and co their marching orders. So whatever salary cap issues the Magpies were grappling with probably should be pinned on others, but not Ned Guy, who inherited the conundrum and was the frontman in trying to remedy them last November.

Buckley’s close relationship with Brenton Sanderson has also been observed by insiders as a positive and negative. The duo work well together, but other assistants such as Robert Harvey prefer to stay in the background and do their job more quietly. It‘s this coaching panel that must find answers to help Buckley and the players out of their slump.

All of these issues – some significant and some minor – are taking place under the watch of new footy boss Graham Wright.

Wright’s fresh gaze will offer the board a fascinating insight into Buckley’s coaching and the club’s operations more broadly. There is a view internally that the coach would rather walk, having read the writing on the wall, than fight and claw until they have no choice but to sack him like Mick Malthouse did at Carlton.

He has essentially said as much, which would match the dignity and esteem to which he is held in the game and around the league.

But the stark reality at the moment is Buckley is at the helm of a sinking ship. It hit the iceberg in the trade period and gaping holes have widened ever since. The erosion of trust that occurred when Treloar was shoved out in acrimonious circumstances left some players disillusioned.

Jeremy Howe spoke to reports on the way into the club on Monday, confirming what everyone knows: winning heals all wounds. But for Collingwood this is a slight falsehood. Even the odd victory will just paper over the cracks.

The issues run too deep and will take a rescue mission to save now. It‘s not infeasible, but it will take the very best of Buckley and everyone below him to salvage a worthwhile season and a new contract now.