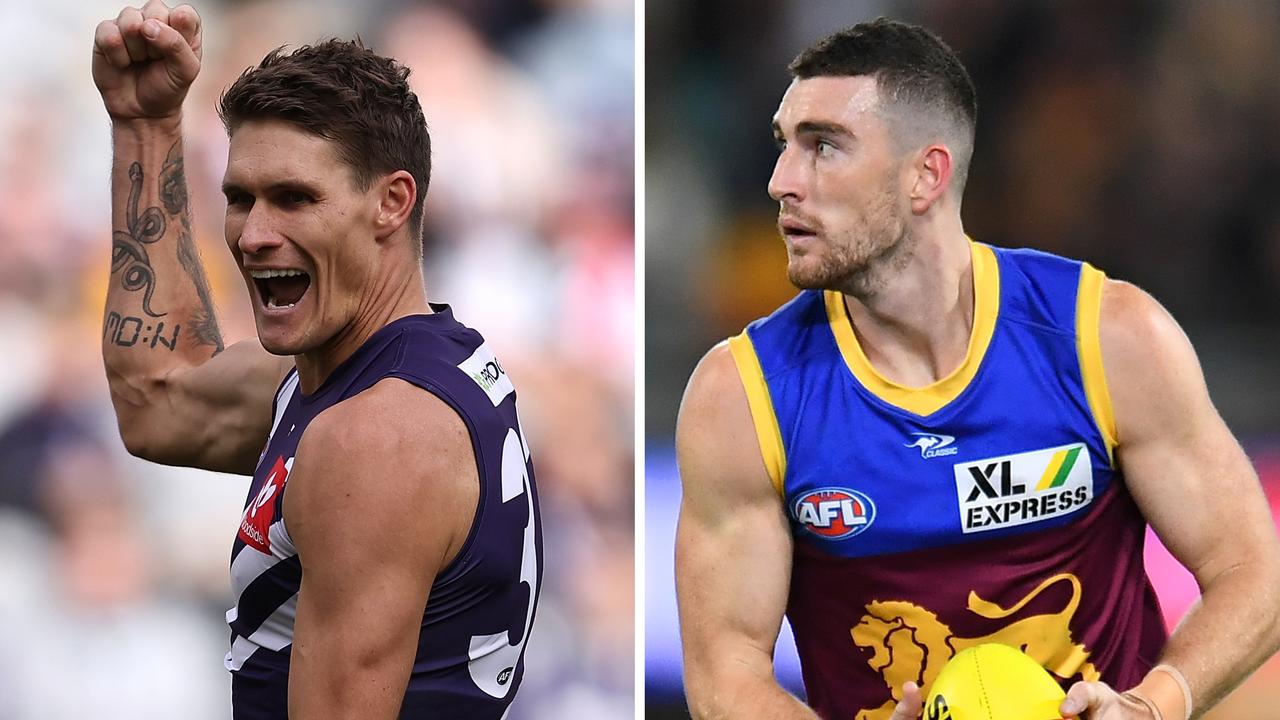 Ahead of Brisbane’s clash with the Bulldogs, Ralph delivered a trade wrap including the latest on Lobb, Daniel McStay and Bailey Smith.

Lobb, who tried to be dealt back to the GWS Giants in last year’s trade period, is said to be interested in a move back to the east coast.

According to Ralph, the market expectation is that the tall-needy Bulldogs will add Lobb via trade, with the 29-year-old seeking a three-year, $1.5 million deal.

Lobb is contracted for 2023 meaning he would have to be traded.

“Rivals now believe that Rory Lobb will get to the Western Bulldogs. He’s on a deal of $750,000 next year at Fremantle,” Ralph said on Fox Footy.

“My understanding he’s looking for a deal of three years at $1.5 million, and he wants to get that deal set in stone early on, so then he can go back to Fremantle and say I want to get a deal (trade) done – which of course did not happen last year with the aborted trade to GWS.

“I think it would be a real surprise if anyone trumped the Western Bulldogs in the market.”

Meanwhile the Bulldogs are expected to re-sign star midfielder Bailey Smith on a two-year contract, through the financial terms are still to be worked out.

Smith is currently suspended, first for a headbutt on Geelong’s Zach Tuohy and then after leaked videos involving illicit drugs, but will likely remain one of the AFL’s most marketable properties and an extremely promising midfielder.

“They’re not right in terms of the money yet, but my understanding is that will be a two-year deal, which will take him through to six years at the Western Bulldogs.”

Meanwhile Lions forward Daniel McStay looks “a certainty” to be wearing black and white in 2023, according to Ralph.

The 27-year-old has been strongly linked to Collingwood on a five-year deal worth $3 million.

“It obviously won’t be publicly announced until the free agency period, but the pull from the wider family as well, he and his partner are both keen to get back to Melbourne, and of course play at Collingwood,” Ralph said.

“It’d be the first player have really lost in terms of quality since Tom Rockliff and the go-home four or five.”

That matters in terms of the Lions’ main trade period priority – getting superstar father-son prospect Will Ashcroft, the current favourite for Pick 1 if available to any club.

If McStay walks to the Magpies via free agency on the mooted contract, the Lions will get a first-round compensation pick – at worst, an end-of-first-round pick – which will give them two inside the top 20.

If Ashcroft receives a bid at Pick 1, both of those picks would be eaten up by Brisbane matching it.

Therefore, similarly to how Collingwood traded out its future first-round pick in 2020 knowing it would be matching a bid for Nick Daicos in the 2021 draft, the Lions could be well-suited trading out one of their 2022 first-round picks.

That would allow them to actually use it for its true value, adding a player via trade, and then match the bid using one first-round pick and later selections.

“There are a lot of options for them. Should they go for a Jordan De Goey in free agency, do you go for a Taylor Walker, a replacement as a key forward, a (Sam) Weideman, (Joel) Amartey type?” Ralph asked on Fox Footy.