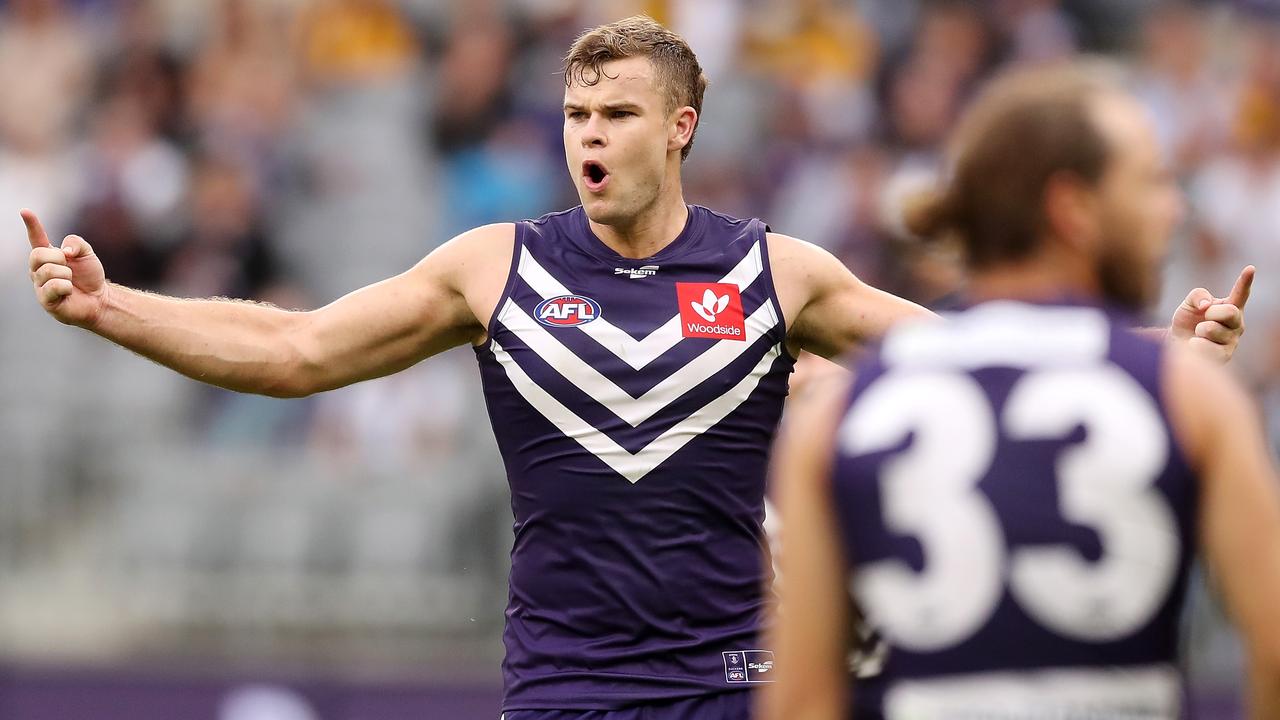 You can take the boy out of Cobden, but you can’t take Cobden out of the boy.

Just minutes after his breakout game on Sunday, Fremantle ruckman Sean Darcy delivered listeners three post-game bombs in an interview that had the Triple M panellists in stitches.

The 203cm, 112kg giant was outstanding in the Dockers’ hard-fought win over Hawthorn on Sunday, producing a career-best game according to the AFL Player Ratings as he proved his capabilities up forward, as well as in the ruck.

Naturally, Darcy was a significant point of interest after the game – and he didn’t disappoint.

Asked what he would normally eat after a game, Darcy told Triple M: “Oh f*** I’ll be asleep pretty soon. Nah I’ll have some pasta probably from last night and head off.”

Eagles champion Andrew Embley, who was part of the interview, struggled to contain himself.

“We were actually watching him from the Triple M box and he was downstairs and he had the headphones on,” Embley told the Rush Hour WA podcast. “I think the first time when he mentioned the f-bomb, he didn’t actually realise it. By the second and third time, he realised it and he was all flustered down there.”

Darcy’s on-air gaffes didn’t detract too much from his awesome performance.

Working closely with teammate Lloyd Meek, Darcy’s ruck craft was on display against the Hawks pairing of Ben McEvoy and Jon Ceglar, finishing with 14 disposals and four clearances, while 10 of his 18 hit-outs went to a Fremantle teammate’s advantage – the best strike-rate of any player on the ground.

But Darcy proved he can be just as damaging in the forward 50, pushing forward to boot 3.2 and finishing with nine score involvements and five marks – of all which were taken inside 50.

Former Docker Michael Barlow said it was a “coming of age” game for Darcy.

“They take a while to develop, these big guys. He’s into his fourth season Sean Darcy, but he came in bigger than what he is now. He’s really slimmed down and worked into an AFL frame in terms of fitness and strength,” Barlow told the Rush Hour WA podcast.

“He would’ve had a tough week after a disappointing game against Carlton. But he’s back.”

Dockers coach Justin Longmuir was thrilled with Darcy’s ability to bounce back after a quiet game against Carlton the week before.

“His ability to move on after a contest, whether it be a good or bad contest, was heaps better. A bit more time in the ruck helps get him into the game,” Longmuir told reporters post-game.

“Playing three talls gave one of them a mismatch at times down there – and he was the by-product of that a couple of times and took really strong marks.”

“He was a little bit down last week second game back, hasn’t had much of pre-season, but I thought he really hit his straps today.”