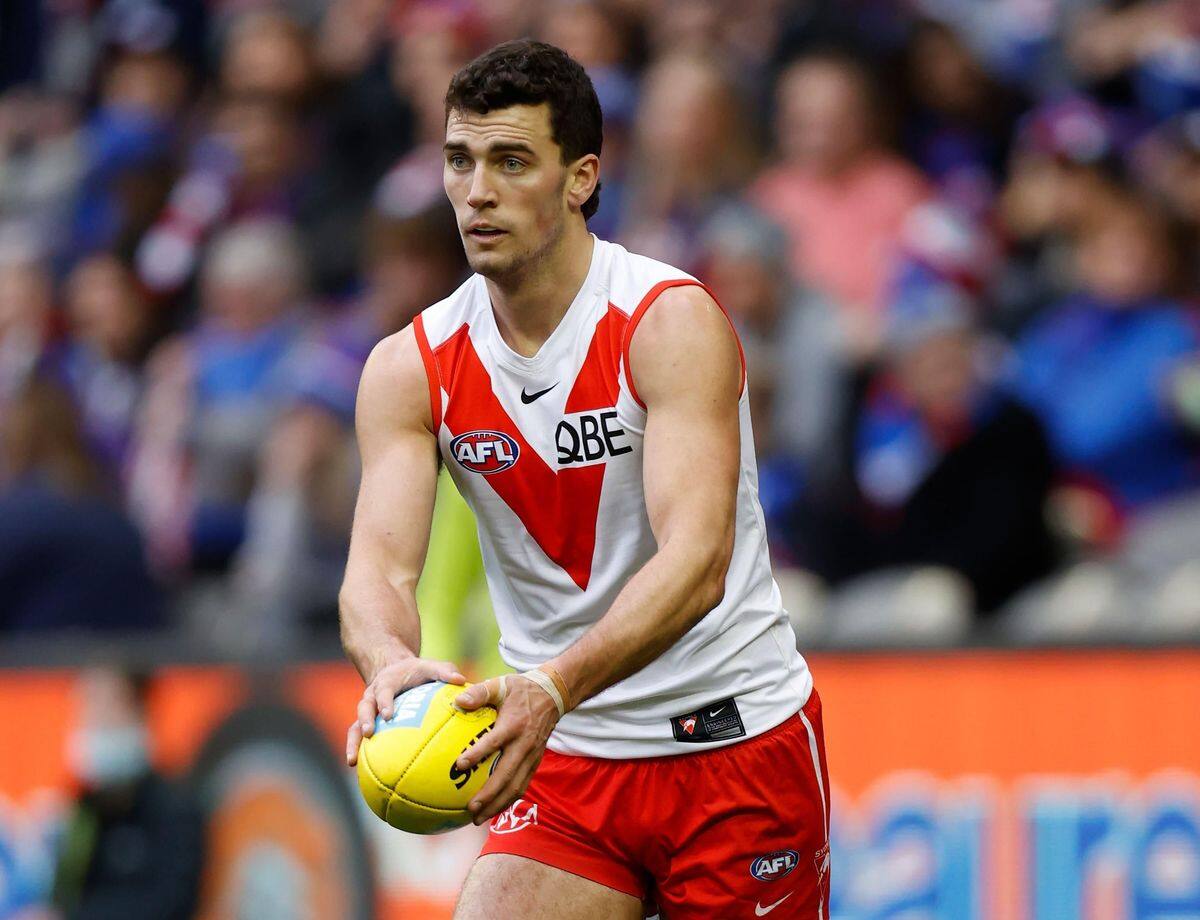 SYDNEY is laying down long-term foundations with new deals for two key-position pillars to build around its steady stream of medium-sized young Bloods.

Tom McCartin and Joel Amartey both joined the Swans at the end of 2017 as exciting forward prospects but are now filling key posts for the Swans at opposite ends of the field.

The 193cm McCartin has become an integral part of the defence alongside co-captain Dane Rampe, after finding his niche in the backline when the Swans were hit by an injury crisis and searching for tall defensive options last season.

Amartey joined the Swans as a rookie selection and was given time to develop his game at the lower level until breaking through halfway through this season as a forward-ruck.

The 21-year-old has played the past six matches and impressed as a high-leaping support for Lance Franklin while also relieving Tom Hickey in the ruck, but has been rested for Sunday’s clash with Fremantle.

McCartin and Amartey were both due to come out of contract at the end of this season but have signed two-year extensions to stay at the Swans until the end of 2023, as first reported on AFL.com.au.

“I’m just happy to be playing a few games in a row but it’s good to know what the future holds for a couple of years,” Amartey said.

“We’ve found our groove a bit and started playing some good footy, so hopefully we can continue that over the next few weeks and maybe into finals as well. It makes it an exciting place to be around.”

The 197cm Amartey admits he was “pretty raw” when he first arrived at the Swans from Sandringham but after finally completing his first full pre-season, he now has the aerobic fitness and confidence in his body to compete at the top level.

He has also had his own dedicated cheer squad for the Swans’ recent matches in Melbourne, with the ‘Amartey Party’ group leading the celebrations for his on-field successes.

“It was some of my mates from school. I’m not sure how it started or where it came from but they’re pretty happy with all the attention they’ve been getting about it,” Amartey said.

“Being able to play in front of friends and family was a real boost, it was a dream come true actually.

“Last year, with COVID, they couldn’t get to my debut and then my next few games were in Sydney while Melbourne was in lockdown. So it was the first few games they were able to get to, they were up for having a few drinks and making it a bit of fun.”

LADDER PREDICTOR Where will your club finish?

As two young pillars for the Swans, McCartin and Amartey are often opposed to each other in training and in match practice, so are in a good position to identify what the other will bring to the club for at least two more years.

McCartin on Amartey: “Joel is really athletic, quick with a nice leap. He’s a tough match-up, his run and jump is hard to stop, so I’m enjoying watching what he can do when he’s at the other end of the field.”

Amartey on McCartin: “Tommy is just so consistent in that full-back role no matter who you put in front of him. He’s the same in training, doesn’t give me an inch. He is just a jet of a player.”

The Swans had a deal with McCartin all but finalised some time ago, as reported on AFL.com.au, and confirmed the deal on Thursday.

“It’s a really exciting group at the moment, so it’s good to get it done and have a couple more years,” McCartin told AFL.com.au.

“We’re just trying to control what we can, which is to play good footy, finish off the home and away season well and worry about anything that comes after that once we get to it.

“We’re a tight group and just want to go through it all together.”

The Swans will now turn their attention to finalising a new deal for co-captain Luke Parker who is an unrestricted free agent and in typically consistent form as he averages 28 disposals a game.

Jordan Dawson is also out of contract at the end of the year and has attracted interest from both South Australian clubs but the Swans believe their own negotiations with the left-footer are progressing well.

Swans Academy graduate Marc Sheather, who was picked up as Category B rookie last year, has also signed a two-year extension on his deal that was due to end this year.