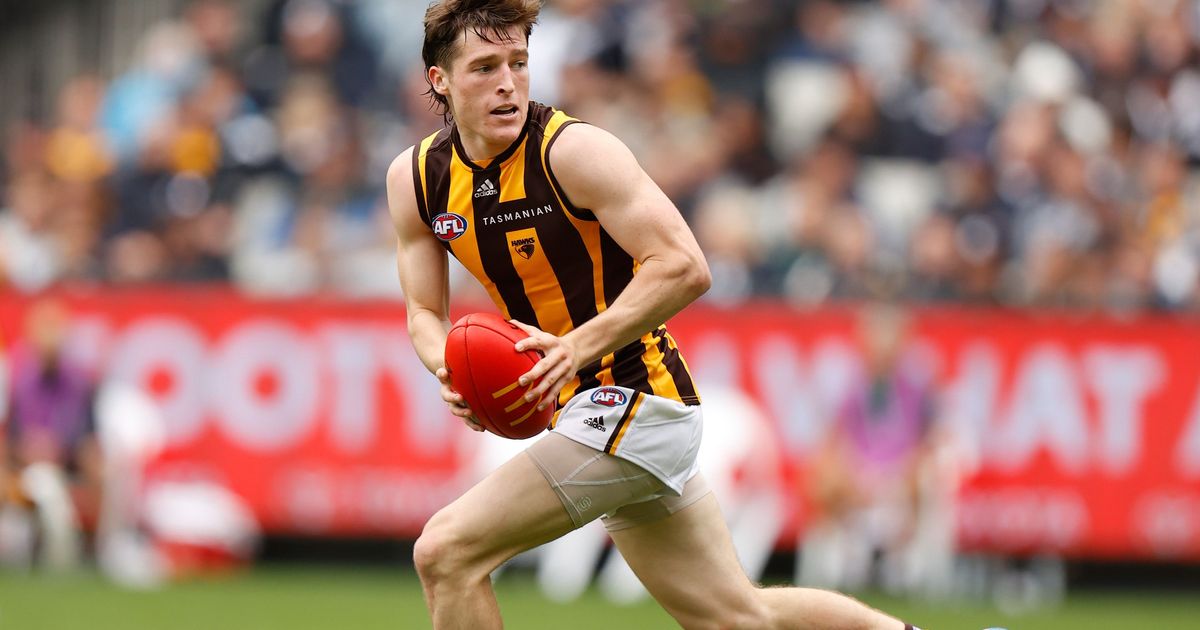 IF EVERYTHING goes to plan in the AFL, Josh Ward won’t finish his law degree for 15 years.

That’s how long it will take the new Hawk to complete the Laws and Politics, Philosophy and Economics double degree at Monash University, given the rate he is ticking off units right now.

But if he is still running around in the brown and gold in 2036, the seventh pick from the 2021 NAB AFL Draft will have had a mighty career at Hawthorn.

If you couldn’t already tell, Ward is a high achiever and always has been.

Not long after the Hawks swooped last November, the Melbourne Grammar product earned an exceptional ATAR score above 99.

The 18-year-old has played 11 games in his first season at Waverley Park, showing in the last month why Hawthorn was so keen on him last year, around his study and work experience at a law firm.

“It’s a five-year degree full-time and it’s four units per semester. At the moment I’m doing one unit. If I keep doing one it will be 20 years, but I think I’ll eventually get up to doing two a semester and maybe one over summer, too. Hopefully around 10 to 15 years. Saying it now, that’s a lot,” Ward told AFL.com.au this week.

“I’m doing one unit this semester. I went back last week. It is good to get into a different environment away from footy. It’s good to be another student for a day. I’m enjoying that. It will take me a while to finish it, but I’m glad to be doing something outside of footy.”

Ward made his debut against North Melbourne in round one and played seven of the first eight games in the senior side before he suffered a concussion playing for Box Hill in May, and it took him more than a month to return to action.

But since then, the boy from Fitzroy has gone to another level at AFL level, earning the NAB AFL Rising Star nomination in round 18 after amassing a career-high 34 disposals and 12 contested possessions against West Coast, before collecting 26 touches against St Kilda on Saturday.

“I’ve felt like this last month has been a lot better. I was thrilled to be able to play some games at the start of the season, but personally I felt like I wasn’t playing at my best. Then I had five weeks off with a concussion that dragged on a little bit, which was a frustrating period. Getting back I felt a lot more confident out there,” Ward said.

It wasn’t the first time Ward has had to tread carefully around some of the invisible concerns related with concussion. He missed seven weeks in 2019 due to a similar issue, taking almost the same amount of time this year to ensure he was fine to play again.

“I was just having these random headaches that persisted for a few weeks when it should probably have quietened down. The lucky thing was they weren’t brought on by any particular exercise. I was able to train pretty hard, I just couldn’t do much contact because of the risk of getting another knock while I was still getting symptoms,” he said.

“The medical staff were very conservative and looked after me very well. I was lucky to stay fit and get myself ready for whenever I could come back. I just had to wait until all the headaches were completely gone before I could get back into contact training and then playing. It was pretty frustrating not really knowing when I might get back.”

Ward grew up a Hawthorn supporter – his great grandfather, Alex Lee, played for the club in the 1930s – revelling in the joy of following the club during a golden era under Alastair Clarkson that included the iconic three-peat and the 2008 triumph over Geelong.

“It is so special to play for Hawthorn. I think if you told me, Max and Ned three years ago that we would all be playing for Hawthorn, I wouldn’t have believed you,” he said.

“It was strange at first coming to a club where I’d been watching for years and then just being another teammates of theirs. I guess it helped not having to learn everyone’s name, I knew everyone’s name at least. It has been amazing being at the Hawks.”

The transition from underage football – and two years of disrupted underage football, due to the pandemic – has been much more seamless and far less stressful for Ward under the guidance of coach Sam Mitchell.

“He is very honest and calm as well, always wants what’s best for his players. We’ve had a lot of chats about my footy and how I’m going,” he said.

“He has been huge for me, learning how to play both midfield and wing. He’s able to make complicated running patterns and strategies seem simple when he explains it.”

If things go to plan, Ward will be a 300-gamer in 15 years, with a double degree from Monash University freshly completed, ready to transition into life after footy.