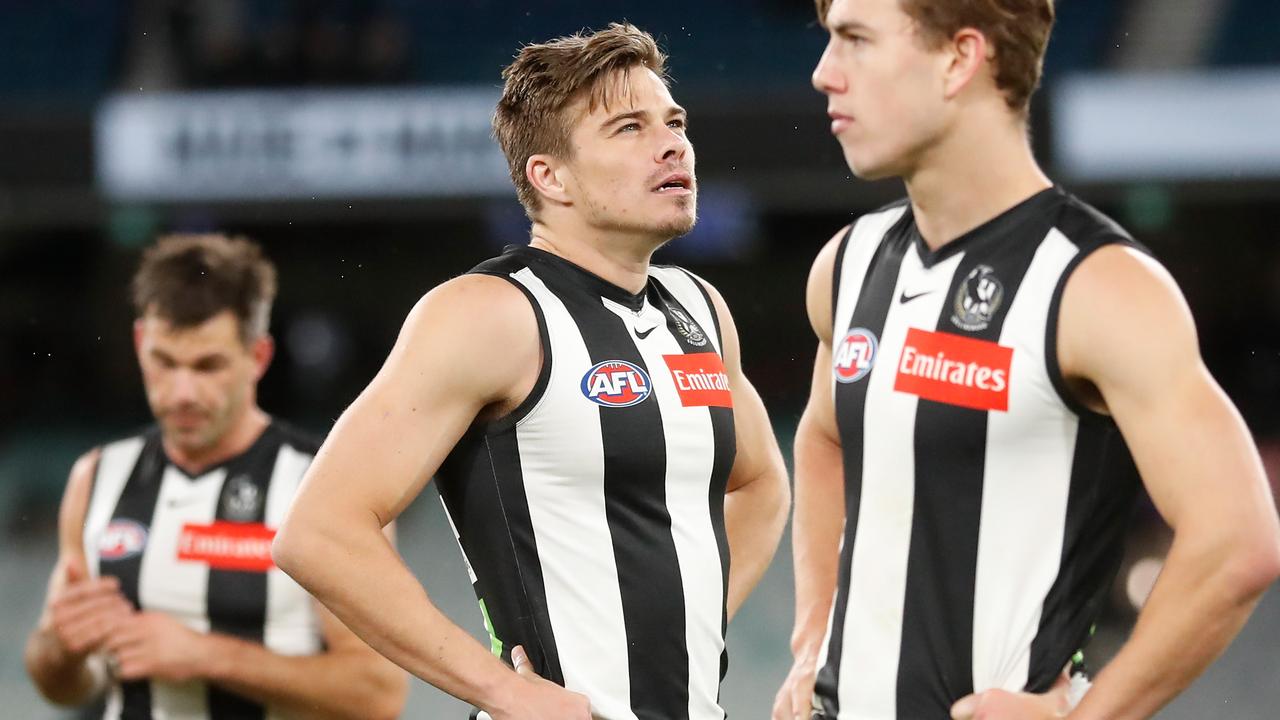 And when the studio lights were turned on, Fox Footy’s commentators didn’t miss the Magpies after their 30-point loss to the Giants on Saturday night.

The defeat has not only left the Pies with a 1-3 record, it’s also led to big question marks surrounding their short-term future, selection strategy, list predicament and, of course, coach Nathan Buckley.

“All the foreboding surrounding Collingwood coming into the season, it was all there on Saturday night,” Whateley told Fox Footy’s AFL 360.

“I think the realisation has come for Collingwood and their supporters that they’re not good enough,” he told AFL 360.

“They’re really in a hot bed right now … and they’re thinking it’s uncomfortable. It’s like the middle of summer, you can’t get comfortable and that’s what Collingwood is right now, they’re tossing and turning and thinking: ‘What are we doing this week?’”

Perhaps the most stark aspect to Saturday night’s loss was the age profile of the two sides.

Of all 18 Round 4 team line-ups, the almost injury-free Collingwood fielded the oldest team in league – and the injury-ravaged Giants had the second youngest.

“They’re in no man’s land,” Riewoldt said of the Pies’ list predicament on Fox Footy’s On The Couch.

“I don’t think anyone thinks they’re contending, but the reason they’re not at the other end and rebuilding is they fielded the oldest side on the weekend and you can’t be rebuilding having just traded your highest draft pick over the last four years in Jaidyn Stephenson. Those two things, they’re the antithesis of a rebuild.”

But Whateley said this “shouldn’t be a new conversation”.

“They well knew that they were jettisoning first-choice players and weren’t replacing them at market value and they didn’t have the cluster of draft picks,” he said.

“Now it’s playing it as you would’ve imagined.”

Robinson said he had concerns that if the losses continued to pile up, the playing group would ask more serious questions of the club’s senior leadership.

“They’re only human beings. If they continually get beaten, they will at some stage – individually, the leadership or whatever – ask: ‘What happened to our salary cap? Who is to blame for this? Why are we in this predicament? We are employed to do our job, you guys are employed to do your job and we have to jettison three first-18 players and look at us now,’” Robinson said.

“When you start losing, everything feels like it was worse than what it was.”

The bizarre trade period wasn’t the only major storyline surrounding the Pies during the off-season, with the leaking of the Do Better report – and the club’s response to it – ultimately leading to president Eddie McGuire’s departure.

Almost two months on and there’s still no timeline on when a permanent president will be appointed.

And the silence is concerning Robinson.

“Who is the president of this football club? No one talks,” Robinson said.

“I’ve been trying to talk to Peter Murphy for weeks and he just doesn’t call me back. He may hate me, that’s fine. But you’d think someone from the club as the acting presidents, six weeks after Eddie McGuire was booted out, would say something to the Collingwood supporters.

Buckley put his own future on the agenda pre-season when he told AFL Media he would be prepared to step away from his role at season’s end if it’s “for the betterment of the football club” and the Pies would benefit with a new direction.

Buckley, whose deal runs out at the end of the 2021 season, confirmed last month his contract situation was “not something that we’ll be addressing until later in the year”.

Four rounds in and it seems even less likely the Pies will be rushing to the negotiating table with Buckley anytime soon.

“Not one for a second would anyone be suggesting that he’s anything other than committed,” Melbourne champion Garry Lyon told Fox Footy’s On The Couch. “But when you come out and say ‘if I’m not there at the end of the year’ and then you’re 1-3 and you’ve offloaded Treloar, which was messy, and you’ve got players in the group who would’ve been close, that all builds.

“Some percentage of that group would look at it and say ‘is he all with us or not?’ That is his challenge, they need to regenerate.

“When he changed and became this more empathetic coach … it seemed to resonate really strongly with the group. Whether that’s still there or not, I’m not sure. But that’s the coaching challenge.”

Expanding on his foxfooty.com.au column, senior Fox Footy reporter Tom Morris said Buckley was “not the same coach as what he was in 2018 and 2019”.

“I think hub life absolutely affect him last year as it did to lots of people, the trade period and the erosion of trust that existed afterwards has affected him,” Morris told Fox Footy’s On The Couch.

“In 2021, there’s a view among senior people within the club that he just isn’t getting the best out of this playing group at the moment.”

THE STYLE AND SPIRIT

Buckley on Saturday night flagged there’d be changes to the club’s player personnel and/or game style from Round 5 onwards.

Brownlow Medallist Gerard Healy, though, said the easiest and quickest change the Pies could make was between the ears.

“We can go back to tactics and structures … but to me what was missing most, it was just spirit,” Healy told On The Couch.

Riewoldt agreed with Buckley that drastic changes needed to be made, as the same issues, including a lack of connectivity between their midfielders and forwards, continued to plague the Pies.

“There was a sameness to them,” Riewoldt told On The Couch. “It was the same sort of stuff we’ve seen from the same personnel and the same style.

“It’s a group that’s in need of real invigoration. You can’t keep doing what you’re doing, the way you’re doing it, with what you’ve got and the people you’ve got out there.

“It’s a tipping point now for Nathan Buckley in terms of either the way he’s trying to capture the imagination of the playing group and the people he’s trotting out every weekend.

“The imagination and selling hope to the group is now the most important weapon in Nathan Buckley’s arsenal.”

The Magpies will be forced to make at least one change, with star midfielder Taylor Adams to be sidelined for two and half months due to a knee medial ligament injury.

But you sense there could be more than one change made, with the likes of Josh Thomas, Will Hoskin-Elliott, Chris Mayne and Callum Brown arguably all under pressure to hold their spots.

Herald Sun writer Jon Ralph reported on Fox Sports News’ AFL Tonight the Pies would turn to Finlay Macrae – an emerging midfielder in the form of his gun older brother, Bulldogs ball magnet Jack Macrae – to replace Adams after a strong VFL outing against the Cats.

Ideally, the Pies would unleash more than just Macrae from their 2020 draft class. But as desperate as they are to name them, Ralph said “a lot of them just aren’t ready”.

“Caleb Poulter, who was the No. 30 draft selection, he was going well as a 193cm wingman and half-back, (but) he copped a knock to the head and needed treatment, which has put him back a week,” Ralph told AFL Tonight.

“But by Round 8 or 9, we might see six or seven of these players into the side.

“The intriguing one for me is Mark Keane, their Irishman. He’s playing great football in the VFL. Now if it was they wanted to play him as a full-back alongside Jeremy Howe and Jordan Roughead, they could throw Darcy Moore forward. See if you can fix some of those forward woes with playing your most dangerous player in the most dangerous spot.”

Outside of Round 2 when he kicked 4.3, Magpies star Jordan De Goey has performed below his best so far this season. But are the Pies making the most of his talent and ability?

The On The Couch panel pointed out that Brody Mihocek and Mason Cox had been involved in 18 and 16 one-on-one contests respectively so far this season as their main targets inside 50. However De Goey – one of the AFL’s best one-on-one players – has only been involved in seven.

Intriguingly, Mihocek and Cox have lost 28 per cent and 63 per cent of those one-on-one contests respectively, but De Goey has lost just 14 per cent of his.

This is despite, according to Champion Data, De Goey being the seventh-best contested one-on-one player in the AFL since 2018, winning 36 per cent of his contests.

“De Goey’s your one. He’s the ace in what is a pretty average, mediocre forward line,” Riewoldt said.

“He’s the seventh-best in the competition but he’s not being utilised like that.

“There are levers for Nathan Buckley to pull to try things a bit differently.”

Brown said their midfield “is ageing and in real trouble”, while triple All-Australian Nick Dal Santo said the Pies “need to get a little bit more life into their midfield”.

But Dal Santo stressed the Pies couldn’t afford to move De Goey into the midfield to fill the chasm left by Adams.

“They’re averaging 72 points per game, that’s not going to cut it anymore, particularly going against the West Coast Eagles that can put up some really big scores,” Dal Santo told AFL Tonight.

“Let other people fill that role in the midfields, still back in your defence, but I think you’ve got to open up the game a little bit. The game is changing, as much as you love the defence, you’ve got to be able to score more than ever.”