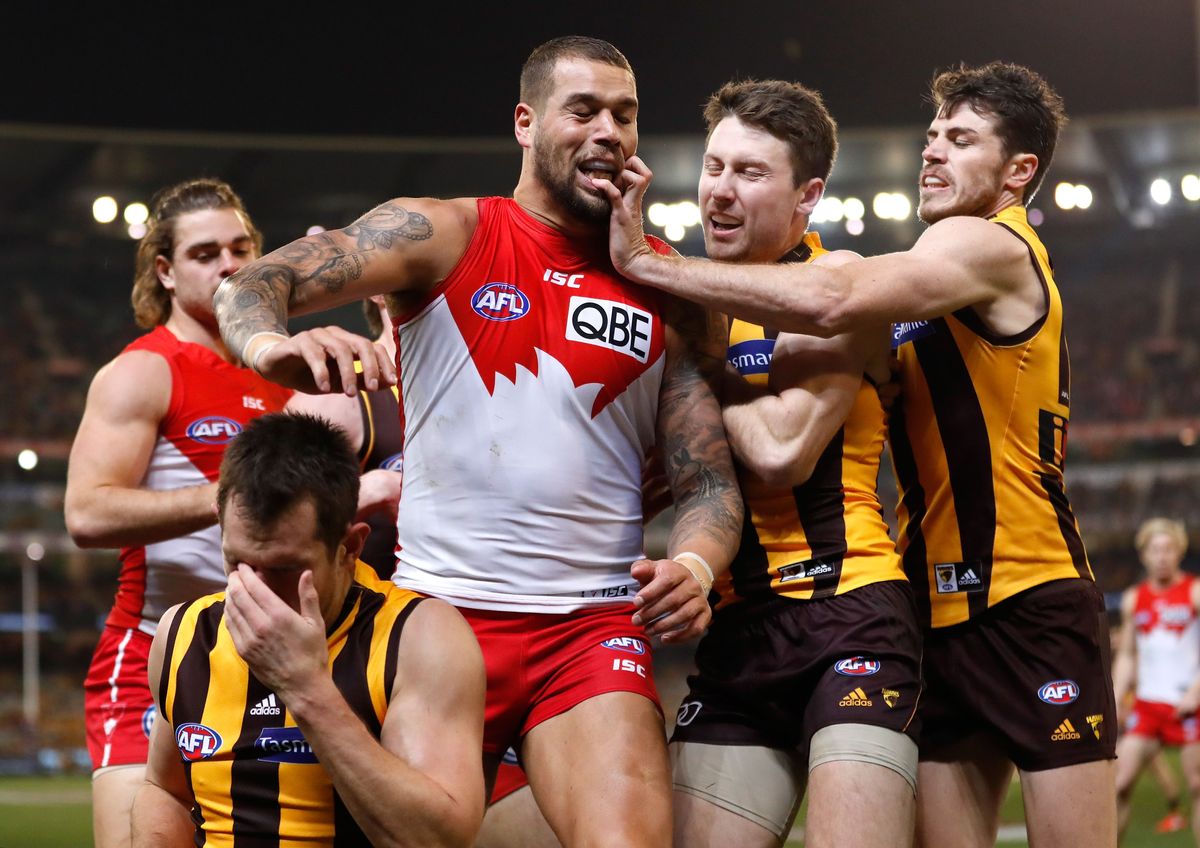 FIERY finals clashes, stars switching clubs and a run of close contests have been part of a volatile brew that has produced one of the great modern-day rivalries between Hawthorn and Sydney.

Even with the Swans soaring while the Hawks are grounded, the heated rivalry will be bubbling away when the two teams meet again at the SCG on Friday night, as we look back at the moments that helped build the battle of the birds.

Two of the top clubs of the 2010s crossed paths in four finals series in four years. The 2012 Toyota AFL Grand Final was the best of these clashes, as a see-sawing contest had the Swans leading by one point at the final change.

After a couple of goals for both teams the margin was back to one point until a crumbing goal by inspirational leader Adam Goodes stretched the Swans’ lead to seven points. The Hawks would rue a few missed opportunities, including a poster from Jack Gunston, especially when Nick Malceski snapped the sealer with 40 seconds left on the clock as the Swans won by 10 points.

Hawks have a grand day out

The finals rivals went goal-for-goal for the first 15 minutes of the 2014 Grand Final but once the game settled the Hawks proved to be too good and ran away to a comfortable 63-point victory.

Luke Hodge won a second Norm Smith Medal in his 250th match, while Jordan Lewis and Sam Mitchell also starred for the premiers. Jarryd Roughead kicked five goals for the Hawks, while the 2014 Coleman medallist Lance Franklin booted four against his former team.

Franklin found himself on the losing side in both of the Grand Final meetings. The superstar at least tasted success in between, as part of the Hawks’ 2013 premiership side, before he switched allegiances at the end of that season. Franklin was expected to move to Greater Western Sydney, but the Swans swooped late to pick up the biggest name in the game as a free agent.

Buddy is yet to add to the two premierships he won at the Hawks, but he has at least had the better of his former team at times. That didn’t look likely the first time Franklin played against the Hawks in round eight, 2014, as he kicked seven straight behinds to three-quarter time. He came out to nail the opening two goals of the final term to claim the lead for the Swans as they went on to win by 19 points.

The Swans bag a bargain

Before Franklin landed in Sydney on the big bucks, Josh Kennedy arrived on the cheap. The future Swans skipper was part of a package deal with Ben McGlynn that only cost the Swans picks No.39, 46 and 70 in the 2009 NAB AFL Draft.

Kennedy had impeccable Hawthorn heritage, as the son and grandson of John Kennedy junior and senior, but after 13 games he moved to Sydney in search of more senior opportunities. ‘Joey’ has gone on to win one premiership, three best and fairest awards and three All-Australian jackets in 257 games for the Swans.

McGlynn also made the most of his time in Sydney, kicking 167 goals in 127 matches for the Swans and only missing out on the 2012 triumph due to a hamstring strain earlier in the finals series.

The Hawks claim a son of a gun

Tom Mitchell arrived at the Swans as a father-son selection in the 2011 NAB AFL Draft, but despite dominating in the reserves, the son of midfield star Barry struggled to regularly break into a strong senior side.

After 65 matches the midfielder was traded to the Hawks at the end of the 2016 season for pick No.14 and a swap of picks in the 50s. Mitchell won the Hawks’ best and fairest and an All-Australian nod in his first year in brown and gold. The prolific ball-winner improved on that the following year, again making the All-Australian team and adding the Brownlow Medal to his achievements.

The rivalry looked like spilling over when Tom Papley and Tom Mitchell clashed after the Swans’ small forward kicked a goal off the ground then let his former teammate know all about it. Mitchell’s response, and James Frawley’s awkward intervention, gave away a free kick – and a second Papley goal in a matter of seconds – that swung the momentum Sydney’s way.

Alastair Clarkson declared after the match that Papley “milks free kicks as good as anyone in the competition”, which left his opposing coach John Longmire bewildered by the critique.

A small forward in his third game inspired the Swans to a stirring comeback against the Hawks in 2018, as Ben Ronke kicked seven goals including the sealer with one minute remaining.

With spearhead Lance Franklin sidelined with injury, the Swans needed someone to step up but few would’ve expected the then 20-year-old to be the difference between the two teams as his side won by eight points.

Hannebery hands one to Roughy

Lance Franklin wore the No.67 guernsey in this 2017 clash to mark the 50th anniversary of the 1967 referendum, but his former team started stronger and led for three quarters. The Swans fought back and looked set for a rousing victory until Shaun Burgoyne goaled with a few minutes remaining to make the margin one point. A rushed behind soon after levelled the scores.

When Jarryd Roughead marked right on the 50m arc in the dying stages of the game, Dan Hannebery failed to man the mark properly and allowed the Hawks’ forward to kick his set shot from the same spot where he’d grabbed it. Roughead’s goal proved the difference as the Hawks won by six points.

In eight clashes between these rivals since 2016, each has won four times and the average margin has been a mere nine points.

In this 2016 contest that helped set the tone, the Swans looked safe with a seven-point lead in the 27th minute of the final term but another late goal from Shaun Burgoyne turned it into a thriller. The Hawks’ star forward Cyril Rioli then marked on the 50m arc with little more than a minute remaining, and went back to kick a beauty from outside 50m to steal a five-point win for the Hawks.

Tickets for the Big Freeze in Sydney match are on sale now. Get your tickets HERE. The famous blue Big Freeze beanies are still available from Coles, Coles Express, Bunnings or fightmnd.org.au, while donations can be made at fightmnd.org.au.