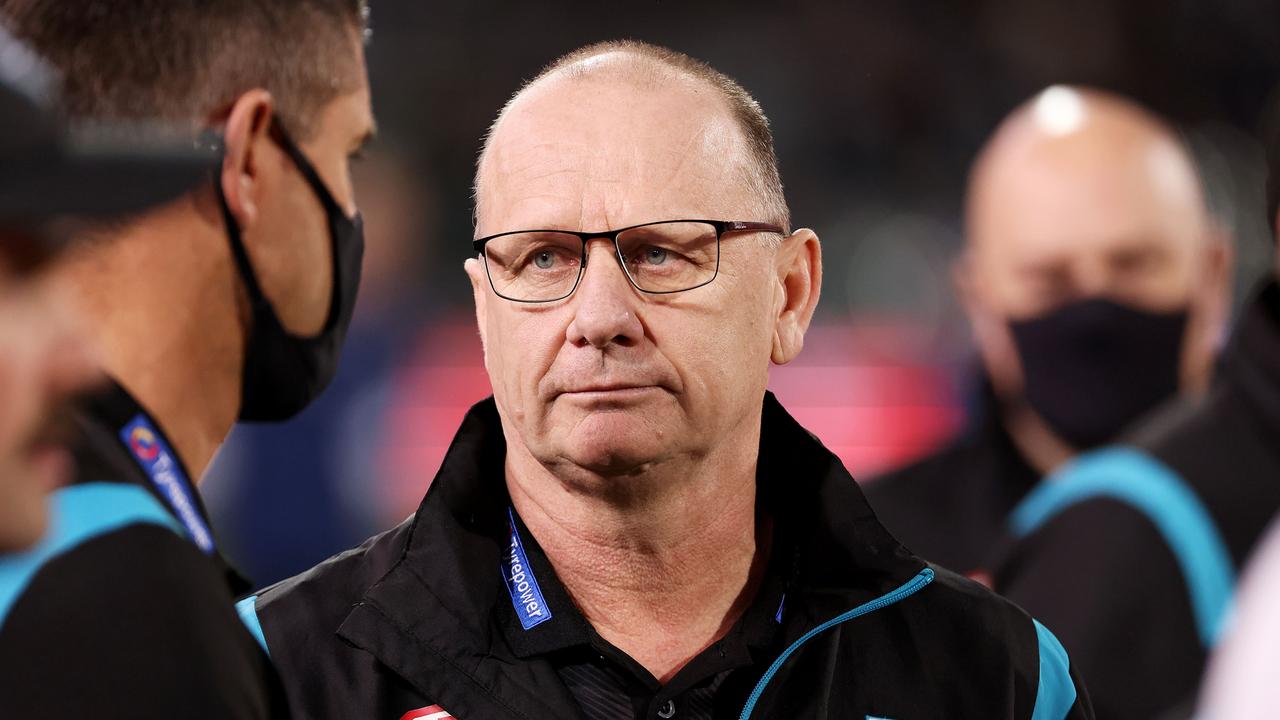 A defiant Ken Hinkley says he expects to be at the helm of Port Adelaide in 2023, and is adamant he has the support of the playing group to do so.

Just hours after Power club president David Koch said “every single person’s role” would be assessed after they missed finals in 2022 and mounting criticism over his coaching from fans, Hinkley remained “confident” he was still the man for the job after 10 years.

When asked directly on AFL360 if he felt any uncertainty as coach after Koch’s “turn it around or watch out” comments, Hinkley replied: “No, no I don’t”.

“David (Koch) himself has said that he expects me to be coaching Port Adelaide in 2023, as do I and that’s what I am preparing for,” he said.

“I think I’ve been given enough assurances (he’ll see out his deal) through the season, not that I needed them to be fair.

“We all get there’s a finish line for everyone at some point.

Koch spoke on 5AA radio on Monday and conceded the club were “not afraid to make change” after a season that resulted in sub-par results.

“We will be making those hard decisions at the end of the year across the entire program to make us better next year,” he said.

“That’s not the statement you want to hear as a coach – no way,” he said On the Couch.

“It appears to fly in the face of what we’ve been told as recently as a month, six weeks ago where Ken Hinkley was backed in to see out the rest of his contract.

“Ken’s a brilliant footy coach, but it just might mean he does it somewhere else and it’s a fresh voice (for 2023 and beyond).”

After back-to-back top two finishes couldn’t get the club to its first grand final since 2007, the Power have missed out on finals altogether in 2022.

And the fans have turned on Hinkley, with some supporters even erecting a “sack Hinkley” sign near club headquarters.

Hinkley said despite the outside pressure, his players “100%” continued to back him in for an 11th season in 2023 – and final year of his current contract.

“I think the playing group have been continuously supportive of all our coaches and in particular me in the last little period of time because my name comes up in the (sack the coach) conversation all the time,” he said.

“They are very supportive.

“They are a fantastic group of young men. They regularly check in on m because they think and they feel some of the pressure that goes with the position I hold and our performances as a team … they feel some ownership of that.

Hinkley admitted the 0-5 start to 2022 was less than ideal and put the club on the back foot.

“Obviously for me and what we’ve been through as a footy club this year … we haven’t been at the level we were hoping to be at,” he said.

“Our own expectation, we certainly haven’t achieved anywhere near that.

“We’ve had a disappointing year.”

In his 10 seasons in charge, Hinkley has steered the Power to finals in four seasons and has a 60.8 per cent win rate from his 212 games as coach.