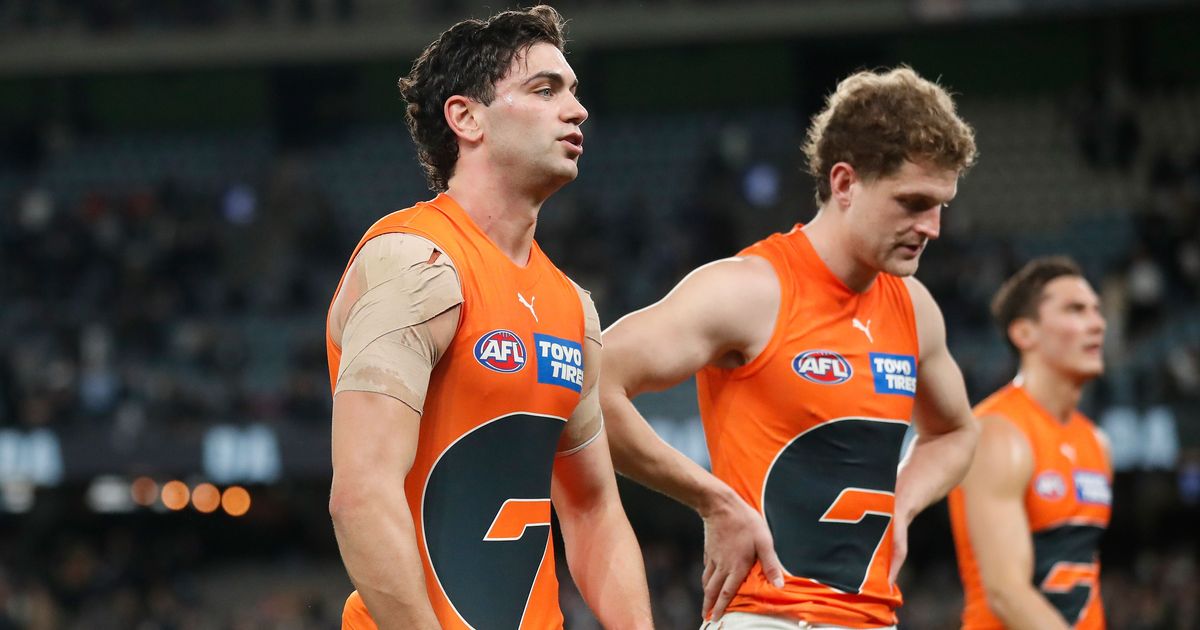 With three rounds to go in the home and away season, Greater Western Sydney looms as one of the most intriguing clubs in the AFL right now.

The Giants are yet to appoint a new senior coach and are set to lose another handful of players in October.

After playing in a fifth finals series in six years last year, 2022 started badly and has never fully recovered.

The Giants arrive in August with relevance only because of the key decisions looming in the weeks and months ahead.

AFL.com.au has identified some of the burning questions facing the club.

Things got ugly fast this year. After returning to the finals last year following a nightmare 2020 on the road, the Giants had to navigate the first five rounds without two-time All-Australian Toby Greene inside 50.

By the time the superstar forward returned on a Friday night in Canberra in round six, Greater Western Sydney’s season was on life support. It left the nation’s capital 1-5 after the loss to St Kilda was added to early losses against Sydney, Richmond, Fremantle and Melbourne – a brutal run to start the season.

Just when the pressure valve was released on Leon Cameron and the club the following week when it torched the Crows at Adelaide Oval, a 53-point loss to Geelong seven days later resulted in the coach parting ways with the club after nearly a decade of service.

After many grew from teenagers and underage guns into men and AFL stars under Cameron’s watch in western Sydney, many senior players inside the club were rocked by the news. But while some have found form since then, the team overall hasn’t reached any great heights.

The Giants are 5-14 and have just been dealt one of the most embarrassing losses in their history, falling to Sydney by 73 points at the SCG last Saturday – their biggest loss to the Swans since round 21, 2015.

It has been a steady decline since Greater Western Sydney progressed to the Grand Final for the first time in 2019, before being dispatched by Richmond. The club has won 25 of 60 games since then and is facing its worst win-loss record (5-14) since 2013, when it won only one game in season two, after winning twice in 2012.

While key defender Sam Taylor has emerged as one of the best in the business this year and will take some beating in the Kevin Sheedy Medal, aside from co-captains Josh Kelly and Stephen Coniglio – who has roared back to form in 2022 – Harry Himmelberg and Greene, the Giants haven’t had too many winners across the season.

HOW LONG IS TOO LONG FOR A CARETAKER COACH?

Something hasn’t gone to plan when a club appoints a caretaker coach to fill the void left by a senior coach who has been sacked or parted ways before the end of the season. Most caretaker roles are less than 10 games – some are only a month – but not in the case of Mark McVeigh, who will finish the season having led the club on 13 occasions – the second most this century behind John Barker, who coached Carlton 14 times in 2015.

McVeigh bolstered his coaching team by bringing in premiership teammates Dean Solomon and James Hird for support. Solomon hadn’t worked in the AFL since leaving the Gold Coast Suns in 2020, while Hird was working in a leadership role at the club before McVeigh picked up the phone. Landing assistants is always difficult in Sydney, highlighted by the three-year pursuit of Matthew Nicks before Adelaide swooped.

Greater Western Sydney won first up under McVeigh when it smashed West Coast by 52 points in round 10. It then pushed Brisbane all the way at the Gabba before adding a second win a week later against North Melbourne, ahead of a win in the wet against Hawthorn in round 16.

It hasn’t been pretty since then. The Giants have been comprehensively beaten by Port Adelaide (55 points), Brisbane (40 points), Carlton (36 points) and Sydney (73 points) and are in danger of spiralling out of control across the final three games of the season. They are ranked 16th for points against in 2022 and have battled to defend a score.

McVeigh slammed the playing group following the awful showing at the SCG last weekend, drawing criticism externally for his savage spray, but not internally by those who thought it was warranted given the performance and that it had already been said inside a meeting room. The club was on the same page as the interim boss and the response has been positive since then.

Some wanted to see wholesale changes at selection this week, but that didn’t eventuate, partly because the cattle isn’t there in the VFL right now, and partly because McVeigh wanted to back in the senior group to respond against Essendon.

The 41-year-old presented for the vacant senior coaching role this week and has been open about his desire to land the role on a permanent basis, after seven seasons at the club.

WHO WILL COACH GWS NEXT?

Greater Western Sydney is getting closer by the day to appointing a new senior coach. There is a view that it might happen before round 23, but there is no concrete timeline.

CEO Dave Matthews, football director Jimmy Bartel and others have been interviewing candidates in recent weeks, meeting with four-time Hawthorn premiership coach Alastair Clarkson multiple times to gauge his interest in moving interstate and his vision.

Port Adelaide coach Ken Hinkley has also been linked to the role, along with assistant coaches Adam Kingsley, Adem Yze, Daniel Giansiracusa and former Adelaide coach Don Pyke. Fremantle assistant Jaymie Graham reportedly turned down the opportunity to interview for the role, while Ash Hansen has made it known he won’t depart Melbourne after moving to Carlton from the Western Bulldogs to join Michael Voss at Princes Park.

Whoever gets the role will determine the future of some players like Tim Taranto, who is understood to be wanting to know what his role will look like in 2023 before making a decision on where he signs, and former captain Phil Davis, who has a contract on the table for next year but is yet to decide if he plays on after two hamstring tendon injuries in 2022.

North Melbourne is the only other coaching vacancy right now and the Kangaroos are pursuing Clarkson as they look to land a fourth senior coach in four years.

HOW BUSY WILL THEY BE THIS OCTOBER?

October will be a very active period for Greater Western Sydney. After Jeremy Finlayson was the only Giant to move to another team last year, the club has been preparing for a Trade Period similar to 2020 when Jeremy Cameron, Zac Williams, Aidan Corr, Jye Caldwell and Zac Langdon all moved elsewhere. This year, Taranto, Jacob Hopper, Bobby Hill and Tanner Bruhn are all expected to leave.

There is a feeling inside Giants HQ that this isn’t a diabolical exodus, rather it is time the club resets the constant flow once and for all – which has been almost unavoidable given the list concessions provided to the expansion side – and corrects its salary cap so it can become a place that attracts star players from other clubs. Aside from Heath Shaw, Brett Deledio and Ryan Griffen, the Giants have never landed a star from another club. Most have been starved of opportunity elsewhere (Braydon Preuss), delisted free agents (Matt de Boer) or veterans (Steve Johnson) looking to extend their careers.

Bruhn is set to become the latest former first-round pick to leave at the end of his first contract, following Caldwell and Jackson Hately in 2020, after Aiden Bonar in 2019, Will Setterfield in 2018, Matthew Kennedy in 2017, as well as Jarrod Pickett, Caleb Marchbank and Taylor Adams.

Hopper is being courted by Geelong and Richmond, despite being contracted for 2023. Taranto is in demand by powerhouse Victorian clubs, including Collingwood and Richmond, but is understood to be waiting to see who the next senior coach is before finalising his decision.

Then there is the future of Davis, who has a contract for 2023 if he wants it, but is yet to make a call on next year. Former first-round pick Xavier O’Halloran is yet to sign a new deal and could be lured home, while local product Kieren Briggs is one to keep an eye on during the Trade Period.