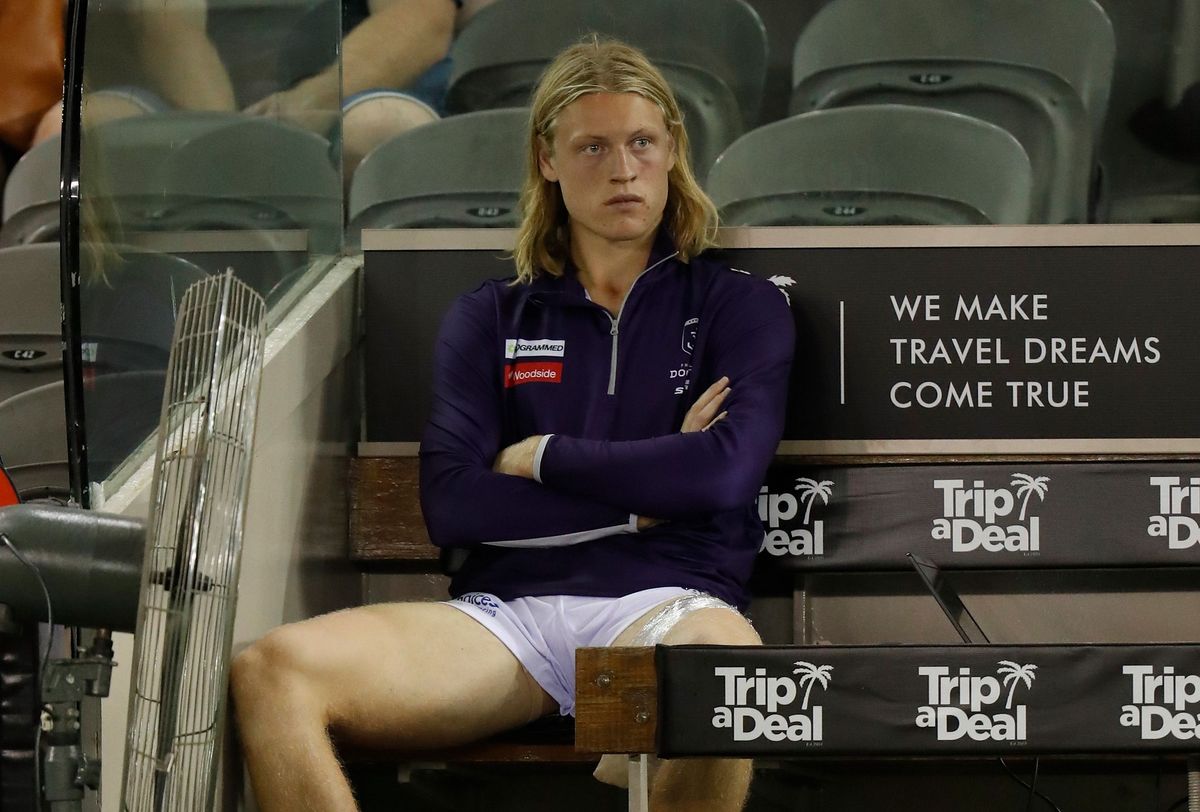 FREMANTLE has lost prized young defender Hayden Young for up to three months after scans revealed a serious hamstring injury that could require surgery.

Young suffered a high-grade hamstring injury in the Dockers’ loss to Carlton last Sunday and coach Justin Longmuir confirmed surgery was an option, with the 19-year-old set to miss up to 12 weeks.

It is a significant blow to the Dockers, who lost the No.7 pick in the 2019 NAB AFL Draft to an ankle injury last year and had settled him into a half-back role in the opening three rounds of 2021.

“It’s devastating for him and it’s bad news for the footy club, but we’ll just have to cover for him,” Longmuir said on Thursday.

“There’s going to be opportunities for him to come back in the later part of the year and play some more footy.

“Youngy’s pretty upset by it, as we all are. But we just need him to do the right thing now and get it right and get back later in the season.

“We haven’t ticked that box at this stage, but it looks like it’s going to require surgery.”

The Dockers will consider recalling defender Tobe Watson to replace Young, who was restricted to five games in his debut season, or moving wingman James Aish into defence. Defender Taylin Duman is also available.

Captain Nat Fyfe appears likely to return from concussion after one game on the sidelines as he approaches the 12-day mark of his concussion protocol period without experiencing any symptoms.

Longmuir said the dual Brownlow medallist, who trained with the main group on Thursday, was confident of a return against Hawthorn at Optus Stadium on Sunday.

“We’ll have to see whether he gets through main training and that will probably be the last box he has to tick,” Longmuir said.

“It’s been really positive and he’s been feeling really good within himself. He’s had no symptoms since he had it.

“He’s ticked every box. In his conversations with me he’s feeling really confident.”

Longmuir said Fyfe would split his time between forward and midfield when he returns after playing almost exclusively forward for three quarters before his head knock against Greater Western Sydney in round two.

The coach didn’t feel the need to inject the captain into the midfield full time to support a midfield that was beaten by Carlton, losing the clearances 29-43.

“I think he’ll still split his time, like he did most of the pre-season and the early rounds,” Longmuir said.

“Our mids were beaten on the weekend, but that was the first time they’ve been beaten. I’ll back them in to rebound.

While backing his young midfielders, Longmuir forecast more than the two forced changes for the important clash against the Hawks, with small forward Lachie Schultz (concussion) also sidelined.

Rookie forward Josh Treacy is not certain to debut against the Hawks, with the Dockers’ preference to play two ruckmen complicating their forward structure without injured big man Rory Lobb.

Talented medium forward Sam Sturt will be considered for his first game since round five last season after booting five goals in the WAFL in his return from an ankle injury.

“He did everything we asked, but he’s been out of footy for a long time and rushing a younger experienced player back, is that the right thing for him?” Longmuir said.

“We’ll have that conversation later. You don’t want him coming into the side and not being right and having to go in and out.”

Tall defender Griffin Logue will return from a hamstring injury in the WAFL this week, while Bailey Banfield could be available sooner than expected after recovering from an ankle injury.