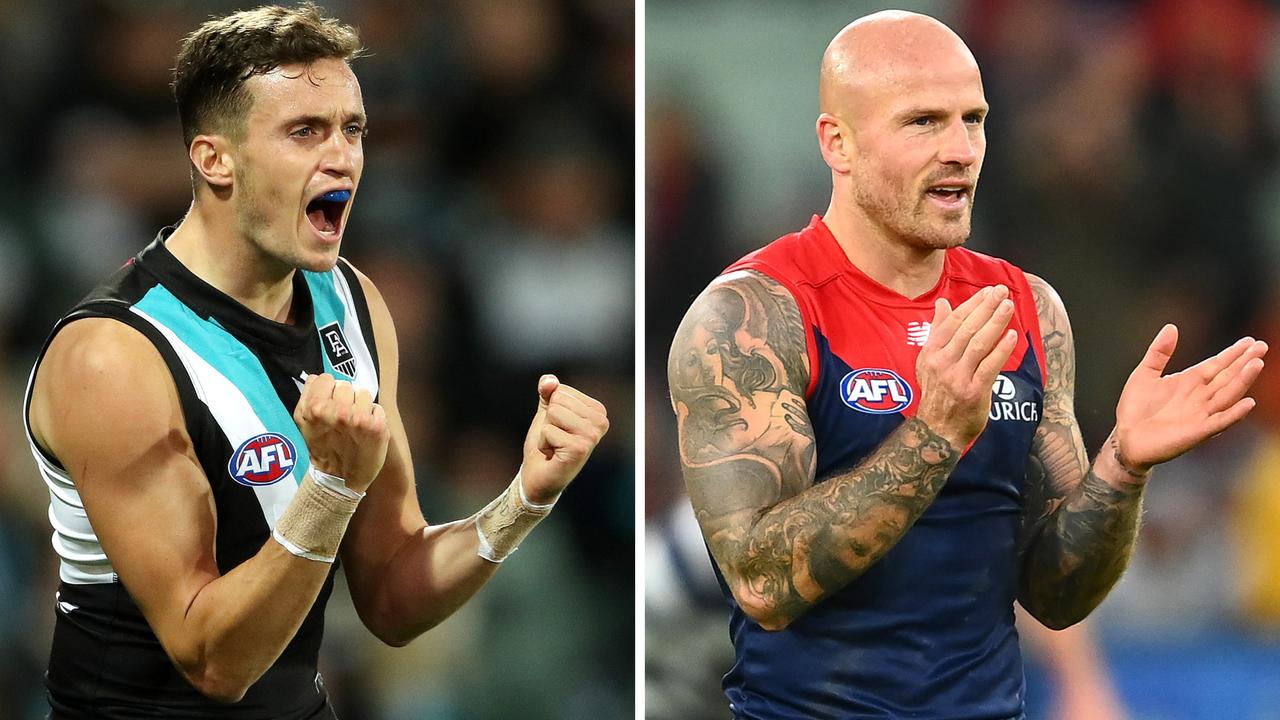 Welcome back to the Power Rankings.

With a month of the season gone, it’s starting to feel like there are six clear finals contenders, and then a bunch of teams with at least some claim to a spot in the eight. So where does everyone fall in the pecking order?

For the newcomers: This is our attempt to rank every AFL club from best to worst right now. We take wins and losses into account, but also the quality of opposition faced and whether teams are likely to get healthier or improve going forward. We’d probably tip a team to beat every team below it at a neutral venue this weekend.

The Bulldogs continue to impress, comfortably working their way past Brisbane in Ballarat. We’re going to have to start talking about their defence differently – we’ve questioned their personnel and trade period decision-making – but they’ve allowed the fewest points of any team in the AFL this season. In fact, only they (239), Melbourne (259) and Gold Coast (287) have allowed less than 300 points in four weeks. It’s an extremely promising sign that they’re not just exciting, but properly good.

In a finals-like atmosphere, the Power held on to gain some small modicum of revenge over Richmond. It’s not a surprise to see them beating the premiers in Adelaide – they did it last year too – but it was good to see their midfield back at its best after a woeful outing against West Coast. And really, given how the Eagles’ midfield went against St Kilda, that game is looking like more and more of a fluke. They face the Blues next followed by two sides still trying to prove themselves in 2021, the Saints and Lions; it’s an intriguing patch.

Next game: Carlton at the MCG, Saturday night

As everyone has said since Friday night: we’re not worried about the Tigers. They’ll still play finals, and probably make the top four too. They’re not at their best right now but they don’t have to be, and they nearly pinched a win on the road against Port Adelaide despite that. We imagine Richmond fans have gotten to a point where they basically ignore the ladder for the first half of the season, knowing their team will get there eventually. That’s a very healthy way to live as a fan.

Alright, so maybe their midfield isn’t suddenly the best in the competition. They ran into a St Kilda side that absolutely had to respond after being whacked all week for their awful loss to Essendon; in a sense, the Eagles copped some bad fixture luck. Realistically West Coast is just back where we thought they were two weeks ago – a very good team with clear flaws that will win almost every game in Perth, and enough on the road to make the eight. The Magpies do well when they’re in backs-against-the-wall mode, as seen in last year’s finals, but we’d still be surprised if the Eagles lose on Friday night.

It’s hard to miss the finals from 4-0. And in the Demons’ case, the ladder is so weird right now that they’re already two games and percentage clear inside the top eight. It would be a major surprise if this team didn’t play finals from here, especially because it seems like they’re for real. They’ve allowed the second-fewest points in the AFL and they’re scoring well despite missing both Ben Brown and Sam Weideman from their forward line – on paper, they should be getting even better in the coming weeks.

Next game: Hawthorn at the MCG, Sunday afternoon

The Swans drop a spot in the rankings despite their fourth straight win; it’s less impressive to only just beat Essendon at home than thumping Richmond at the MCG, after all. We saw on Thursday night teams are already starting to adjust to their tactics – the Bombers forced them along the sideline, rather than letting them through the corridor, in the first quarter and a half. It set up a nearly five-goal lead. But Sydney did well to adjust and have now given themselves a base to launch into the top eight. As we said above, it’s hard to miss the finals from 4-0.

Next game: GWS Giants at the SCG, Saturday twilight

The Saints simply had to respond and they did – brilliantly. They brought intensity and pressure from the opening bounce, and eventually their efforts paid off, overcoming a 33-point deficit (which admittedly flattered a super-efficient West Coast). It was the sort of performance from them we expected coming into 2021 and now they need to show they can do it every week, rather than just when the entire AFL community whacks them for a week. We’re very intrigued by their clash with the Tigers, who’ve lost two on the trot and are going OK, but not great.

Of the teams from last year’s top eight that are currently in the bottom ten, the Cats are in a unique position. They’re 2-2 like Richmond, but no-one’s worried about the premiers. They’ve got an extra win banked over Brisbane and Collingwood, giving them some breathing room. And they’re kind of like St Kilda, given both teams are 2-2 and understrength, but the Cats haven’t had a win as good as the Saints have. So we’re sitting here expecting Geelong to be good, but mostly because they’re always good, rather than anything they’ve shown in 2021.

We still have faith in Brisbane, but it’s fading. They’ve played a tricky fixture, but how much weight can you put on that and the whole ‘having to stay in Victoria’ thing? Their underlying numbers are poor, and it doesn’t feel like they’re adjusting well to the new rules and style of game they’ve created. Obviously there’s a lot of talent here, and perhaps they’ll get going over the next two weeks against Essendon and Carlton; but if they don’t, their odds of playing finals will seriously shrink.

Next game: Essendon at the Gabba, Saturday night

The Blues got the job done in a game they simply had to win if they want to play finals. Tick. Their midfield continues to shine and they’ve stopped leaking a million goals a week. Tick. But now after two relatively easy weeks of the fixture, they get a proper test against Port Adelaide. Win that and they should head into games against Brisbane and Essendon with realistic hopes of being 5-2.

Next game: Port Adelaide at the MCG, Saturday night

That was a brave, brave win from the Giants. It’s not as if they beat a weakened Collingwood side either – well, they’re weakened compared to last year because of their trade period, but we meant injuries. Toby Greene continued his tremendous form while Callan Ward, Tim Taranto and Jacob Hopper were at their best. We suspect this was as well as GWS can play right now, and they’re not going to play like that every week, so they still won’t be playing finals – but it’s good to know there’s fight left in this group.

Next game: Sydney Swans at the SCG, Saturday twilight

There’s probably a bit more panic around Collingwood than is justified, but that just speaks to people having higher expectations of this group than they should. They’re an eighth-placed team from 2020 that got worse in the off-season, and then played a bad game. Right now there’s a solid top six of teams – the three unbeatens plus the Power, Eagles and Tigers – and then there’s a big group where anyone can beat anyone on the day. Collingwood is in that bunch.

It’s so weird looking at the ladder and seeing Adelaide up there above West Coast and Richmond. And of course we’ve reflected the fact the Crows aren’t as good as them by ranking them 13th here. We still like a lot of what Matthew Nicks’ side is doing but the 41-point margin against North Melbourne was incredibly flattering; that was a close game until the last-term blowout. And to us, any team that doesn’t beat the Kangaroos convincingly probably isn’t playing finals.

The Dockers simply had to beat the Hawks at home, and they did, but it wasn’t at all convincing. Freo was spectacular in the first term and just OK for the rest of the evening; and that’s not good enough against a Hawthorn side that’s lacking talent. Their inability to kick straight is a real problem, too. Justin Longmuir’s group has fallen out of the group of finals dark horses and unless something changes, they may not return.

After two impressive games in a row, we were tempted to push the Bombers even higher up the rankings, but we’d just like to see them do it one more time before saying they’re not a bottom four side. They’re definitely feisty, and they’d be in the top eight right now if they’d just been able to hold on against Hawthorn. It’s totally reasonable to believe they could beat Brisbane this Saturday, which isn’t something we would have said a month ago.

Next game: Brisbane Lions at the Gabba, Saturday night

We mentioned in Collingwood’s capsule how there’s a group of teams, outside of the top six in these rankings, where anyone can beat anyone on their day. We’d include the Suns in that group; it’s just that someone had to be 16th, and they’ve only beaten North Melbourne so far this season. An unlikely finals run will become very unlikely if they drop to 1-5 – which looms large with games against the Bulldogs and Swans to come in the next fortnight.

The Hawks are going along as well as could’ve been reasonably expected of them – nearly beating Geelong and nearly beating Fremantle in the west. That may be frustrating to hear for their fans but that’s where they are. It’s better to be showing this much fight than showing very little, like the team below them.

Next game: Melbourne at the MCG, Sunday afternoon

There was a moment there, early in the fourth quarter, where every footy journalist in Melbourne was readying their “jeez, how good were North!” story. And then the rest of the fourth quarter happened. Look, it’s good the Kangaroos showed any sort of fight. And they won’t go winless – that’ll be a talking point soon enough, so let’s just get out ahead of that one. But that was definitely one of the best chances they’ll have to win in 2021, and they ended up losing by 41 points, which says something.