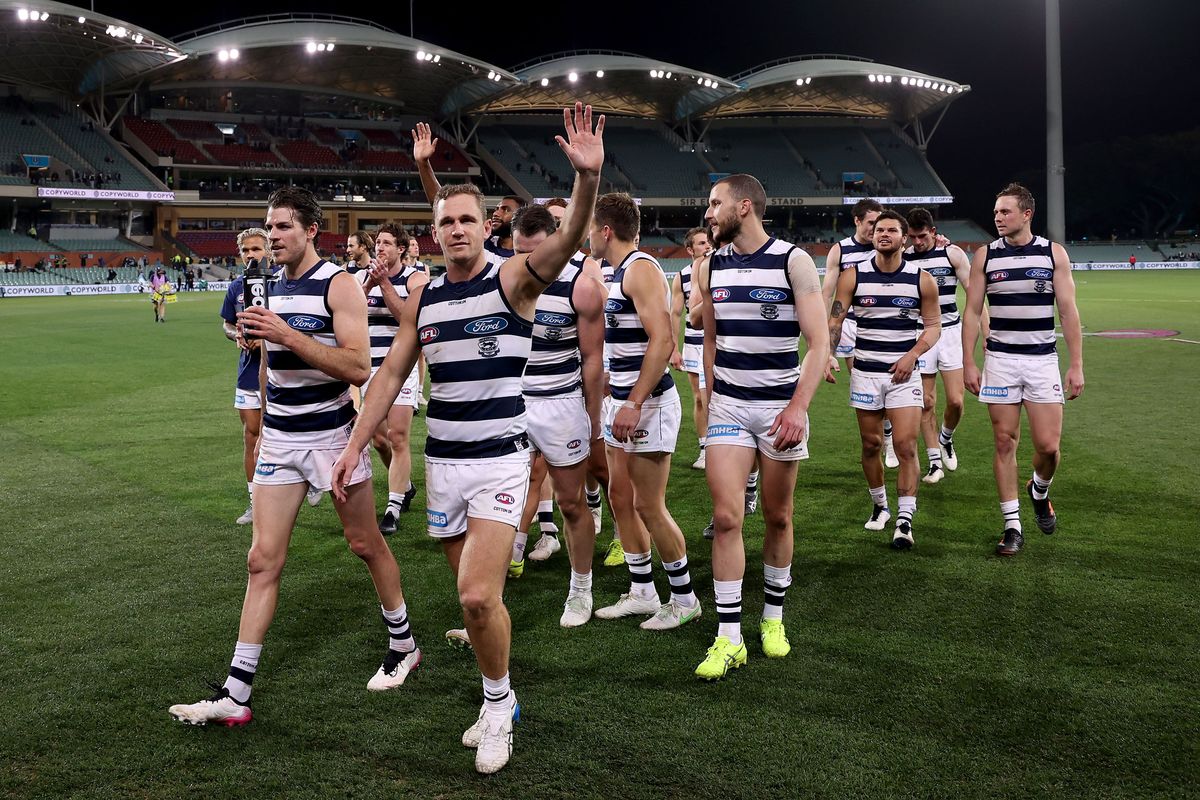 GEELONG will remain in Adelaide until Friday after their late-night flight back to Victoria was cancelled due to fog, with Cats coach Chris Scott praising his side for its victory over Port Adelaide after “arduous” circumstances.

The AFL had arranged with the South Australian government for the Cats to fly straight out of the state following Thursday night’s clash with the Power, but fog in Melbourne will see that delayed until Friday.

The Cats will be savouring an important victory on the road, with their seesawing 21-point win over the Power consolidating their place inside the top four and coming after the team had a long wait inside Adelaide Oval after jetting over earlier on Thursday.

Scott said his side’s resilience had been tested during the many hours in the lead-up to the match.

“I shouldn’t play it down too much because they were trying circumstances. In the fullness of time people might look at Collingwood (last week against Adelaide) and us coming over here and still winning the game and say ‘It couldn’t have been too bad’,” Scott said post-game.

“But the restrictions the South Australian government put on us were arduous, there’s no doubt about that. But it was good that we were able to put on a show.

“It’s not only a credit to the way we played and the way we adjusted to the heat [Port Adelaide] was putting on us, but also the resilience we showed under trying circumstances.”

The Cats had several hours to spend at the venue during the day before ramping up their preparations for the clash with the Power, with some players sleeping under tables searching for darkness. However Scott said the unusual pre-game build-up did not deter his side as it hunted an important win away from home.

“If I was a bit more of a crazy coach looking around I would have been a lot more worried than what I was, because there was some strange scenes,” he said.

Scott had his own strange moment at three-quarter time, when he tripped on his way down to the ground to address his players.

“I tripped on someone’s leg so I said to the security guard ‘Did he trip me?’ or ‘Do you need to make sure the legs aren’t popping out?’ It was probably an accident, I’m not sure,” he said.

The 2011 premiership coach advocated for direct access onto the arena for coaches at the ground.

“In the most respectful terms possible, when you have a stadium of this quality renovated and to overlook the fact the coaches still have to walk through the crowd, is a little bit silly, especially in the circumstances we’re in at the moment,” Scott said.

“But in all sincerity, post-game I thought the Port Adelaide supporters were very sincere. It’s the first time walking off the ground at a game in Adelaide where the supporters have actually been quite complimentary and sportsmanlike in the way they interacted with us.

“It’s rare and when it happens they should be complimented. I appreciated it.”

Port Adelaide looked set to run away with the game early in the final term after booting the first three goals of the last quarter, with coach Ken Hinkley saying his side remained a step behind the top sides.

“We’re good enough to challenge them and get really close – the last two games against the Bulldogs and Geelong here – they’ve been games that have been on for the most part of the game and we just haven’t been quite efficient enough or effective enough to win that game at the end of the day.

Tickets for the Big Freeze in Sydney match are on sale now. Get your tickets HERE. The famous blue Big Freeze beanies are still available from Coles, Coles Express, Bunnings or fightmnd.org.au, while donations can be made at fightmnd.org.au.