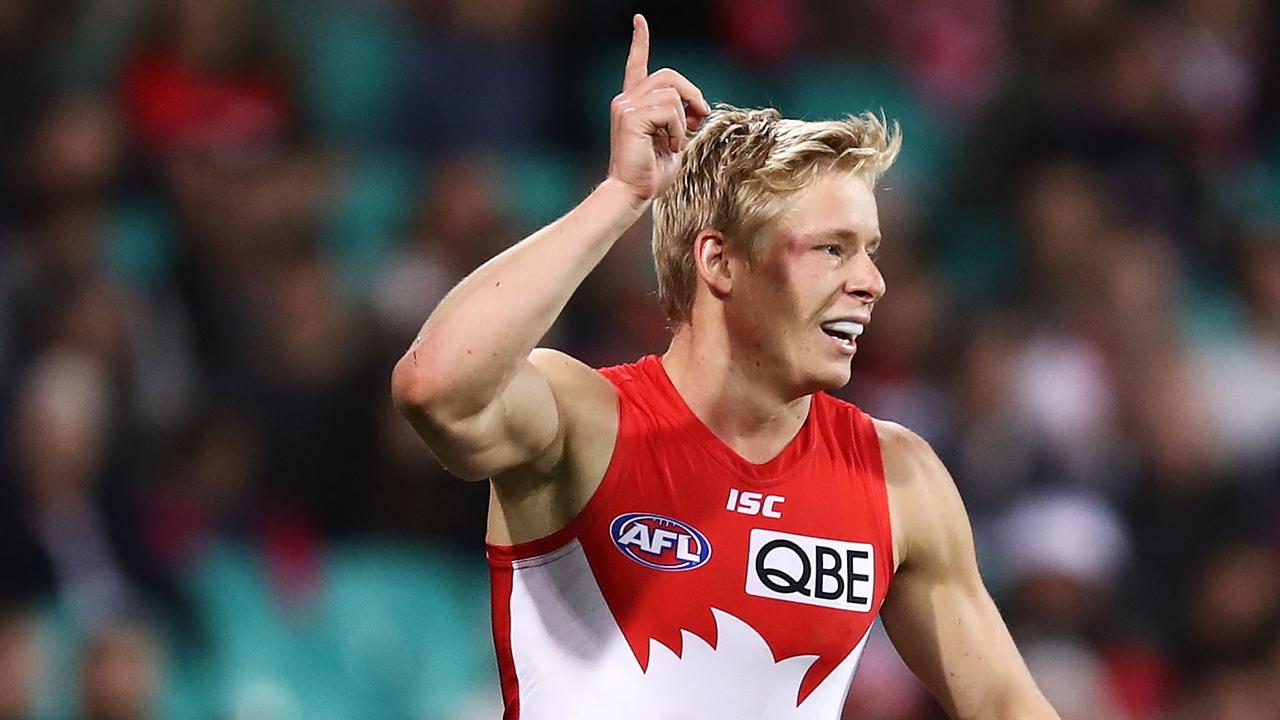 The Sydney Swans are coming off their worst performance of last year to end the 2022 season; an 81-point shellacking at the hands of reigning premier Geelong Cats in one of the more one-sided Grand Finals in recent memory.

Completely and utterly dominated in all facets of the game from the opening bounce right up until the final siren, it’s a performance the team would probably rather forget.

Watch every match of every round of the 2023 Toyota AFL Premiership Season LIVE on Kayo Sports. New to Kayo? Start your free trial now >

That’s not the case according to Swans star Isaac Heeney who said that rather than immediately burying their heads in the sand, head coach John Longmire and the rest of the club were quick to address the elephant in the room.

“We reviewed it reasonably quickly. We more spoke about the feelings of the game, the week leading up and how the boys dealt with it,” Heeney said on SEN’s ‘Dwayne’s World’.

“It’s one of those games, I think for a lot of boys it went extremely quickly. It kind of went in the blink of an eye, you look back and you can’t really remember too much because it just happened.

“We kind of dove into a bit of the mental side… and (questioned did we go) into the game the way we should have in terms of knowing what Geelong can produce.

“We’ve addressed that, Horse (Longmire) has been extremely good about it. We live and we learn, the boys are excited about it and hopefully we can get back there soon.”

As far as what regrets the 2022 All-Australian still harbours from his own individual performance that fateful day at the MCG, Heeney said he wished he’d made a move to the midfield sooner.

“It was obviously tough as a forward being a bit starved of the footy up there. Maybe (if I) had injected myself in the midfield a little bit earlier and seeing if I can change something up as it obviously wasn’t working,” the 154-game Swan said.

The 26-year-old acknowledged that the better side on the day won but said that rather than dwelling on one poor performance among a season of good ones, the club took what lessons they could from it and quickly turned their attention to 2023.

“It was just one of those days. It was a big challenge for us, we couldn’t get it done on the day and credit to Geelong, they had an outstanding season,” he said.

“I guess it’s a little bit frustrating that we had such a great year and it was the last game that we got blown of the water a bit.

“But you live and you learn, and you give all respect to Geelong. The way they handled things on the day and the whole year and the finals series was impressive.”

Heeney and his teammates are laser focused on 2023 with the aim to once again be playing on the last Saturday in September with an opportunity to avenge last year’s Grand Final disappointment.

Many would assume that a team filled with bright young talent and who play an exciting, attacking brand of footy such as the Swans would be a good chance of making the grand final in 2023 and even possibly winning it this time.

However, recent history isn’t in their favour with only four of the previous 10 clubs who suffered 40+ point defeats in a grand final since the turn of the century, returning to the finals again the next season. Even more alarming is that of the four clubs who did manage to make it back to the finals the following season, none of them made it past the second week.

Most recently, the Bulldogs snuck into last year’s finals series – as they struggled to recover from the 74-point smashing they received courtesy of 2021 premiers Melbourne – only to give up a five-goal quarter time lead in their 13-point elimination final defeat to the Dockers.

Meanwhile the 2016 Eagles team, who lost the previous year’s grand final to Alastair Clarkson’s all-mighty Hawthorn side by 46 points, failed to reach the heights of 2015 before being ambushed on their home deck in a 47-point elimination final loss courtesy of eventual premiers the Western Bulldogs.

In 2014, the Swans were the ones on the receiving end of a Hawks thumping in the grand final (going down by 63 points) before finishing top four again in 2015 – a feat Longmire’s men will be hoping to repeat. However, that 2015 team would shatteringly bow out of the finals in straight sets, thanks to a nine-point loss to minor premiers Fremantle in the Qualifying Final, followed by a shock 26-point home Semi-Final defeat at the hands of the Kangaroos.

Ross Lyon’s powerhouse St Kilda side never looked the same following the heartbreaking 56-point belting they copped from the Pies in the infamous 2010 Grand Final replay, starting the 2011 season with only four wins from their first dozen games before winning eight of their next 10 following a mid-season bye – only to fall at home to the Sydney by 25 points in that year’s Elimination Final.

Despite the alarming statistics which don’t bode well for their chances this season, Heeney and the Swans will be hoping they can find a way to buck the trend and claim the club’s elusive sixth premiership.

After outperforming expectations in 2022, Sydney will be eager to return to the winner’s list when they begin their 2023 campaign against the rising Gold Coast Suns in a Saturday night clash at Metricon Stadium.