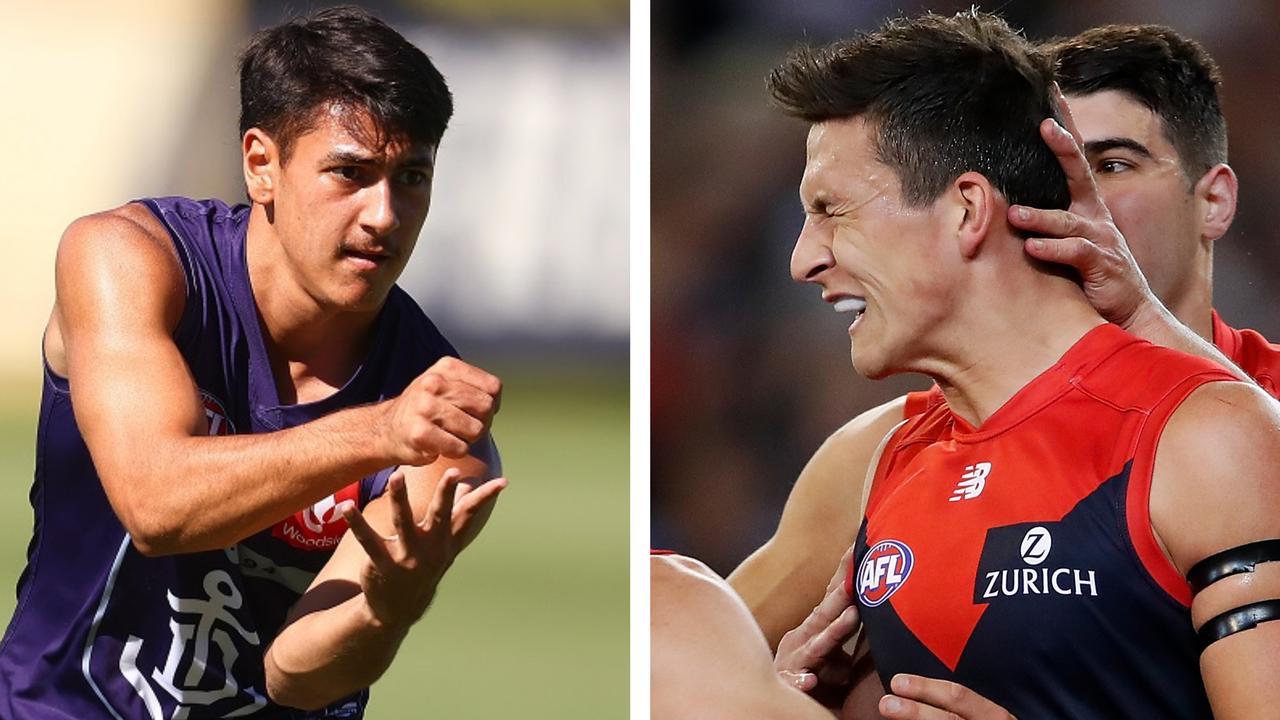 Fremantle could unleash its fourth debutant of the season.

Plus Sydney is hopeful of welcoming back two stars, while Melbourne could spin the magnets.

Get the latest selection news and updates in AFL Team Whispers!

LISTEN TO THE LATEST EDITION OF THE FOX FOOTY PODCAST HERE, OR TAP TO SUBSCRIBE IN ITUNES OR SPOTIFY

FREMANTLE could unleash its fourth debutant of the season this weekend, with Next Generation Academy prospect Joel Western in the mix to face the Brisbane Lions.

The West Australian reported Western was the only uncapped player that was part of the Fremantle travelling party that left for Queensland on Wednesday.

Western, who was taken with Pick 54 in the 2020 national draft, last week produced his best WAFL game of the year to date, kicking one goal from 26 disposals and 10 marks against the Eagles.

Western’s possible debut comes with the Dockers in the midst of an injury crisis.

Heath Chapman and Ethan Hughes have both remained in Perth as they face sideline stints after their respective shoulder injuries, while All-Australian defender Luke Ryan will miss at least one more match due to a calf issue.

BRISBANE is set to welcome back key defender Darcy Gardiner from concussion.

Longmire told SEN’s Whateley that “everything was pointing the right way” for Rampe but would need to complete a training session on Thursday.

The Swans coach added Franklin was in a good position to push for a re-call.

“He was able to run, really hard at the back end of last week … had a big session on Monday and pulled up really well. We‘ll plan to train him again (on Thursday) and see how he goes.

“Obviously, we’ve been cautious with him to this point in the season. We’ll still do that. But in the end, he’s only missed the two games and he’s been able to run at the back end of last week and train all this week. So we’ll sit down and work out what it looks like.”

MELBOURNE is set to keep forward Tom McDonald inside 50 despite temptation to move him back to fill a vacant role after an injury to Adam Tomlinson.

McDonald was switched back after Tomlinson ruptured his ACL against North Melbourne, but coach Simon Goodwin confirmed he would be in his usual role on Saturday night.

“(McDonald‘s) going to start as a forward, he’s been one of our best forwards all year, so we’ll get him back in that position,” Goodwin said.

“He did a great job last week under difficult circumstances, but he‘ll be back in the forward line where he’s played some strong footy.

“Harrison Petty will come into the team. Harrison‘s ready to play some footy, he’s worked incredibly hard and is another highly valued young player that’s put 3-4 years of development into his body and he’s ready to play a significant role for us.

“It‘s come under really unfortunate circumstances with ’Tommo’ going down, but he’s been ready for a little while.”

The move is set to keep Sam Weideman out of the team despite another outstanding performance at VFL level.

“Sam‘s a terrific young kid, a young player who has invested a lot into our footy club. I’m sure that’ll sort itself out in time. He’s a highly valued person and he’s going to have a great career with the Melbourne footy club,” he said.

“Sam‘s in a great spot. He’s just got back from injury, he’s played four games now (including one practice) back from an eight-week layoff, and his game is starting to come into great shape. There’s no question he’s going to push for selection pretty hard and be an integral part of our team at some point,” Goodwin said.