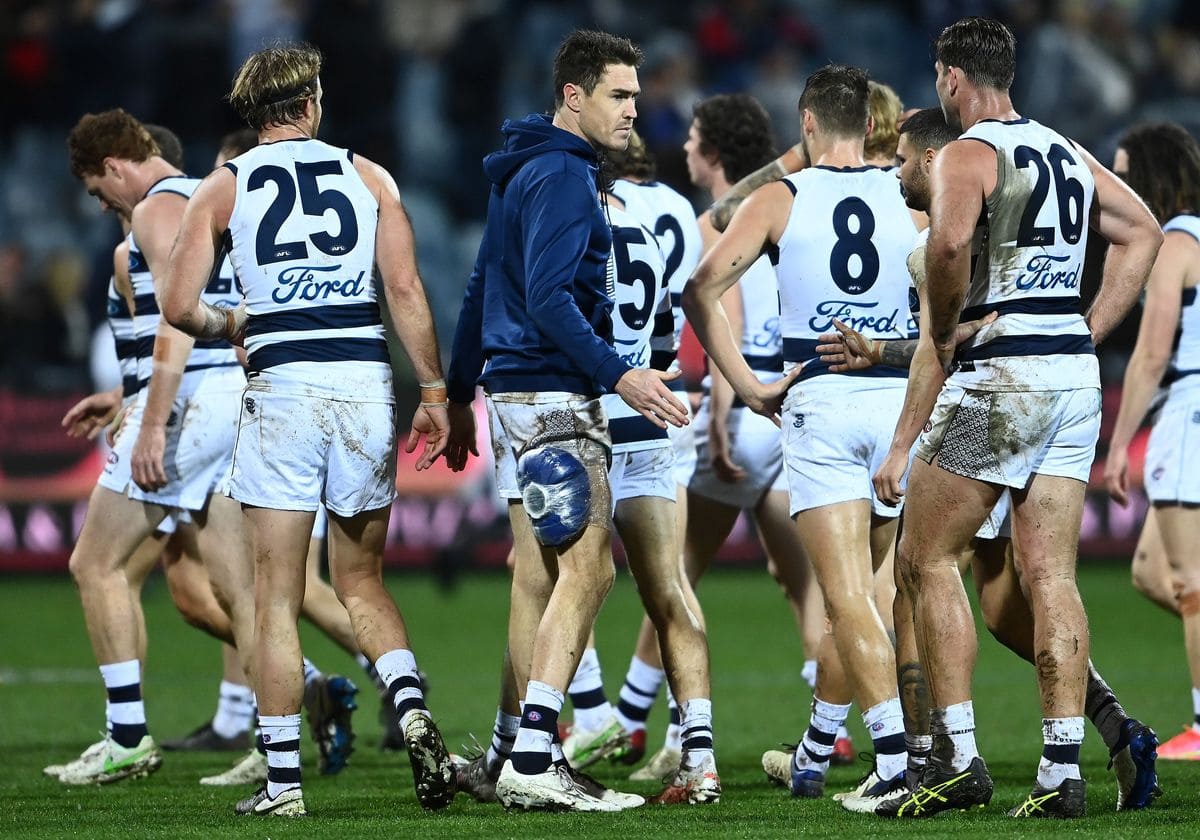 GEELONG remains confident spearhead Jeremy Cameron will play before the finals series and allow him to build further synergy with Tom Hawkins in the wake of his latest hamstring setback.

Sunday’s clash with Richmond will mark Cameron’s third match watching on after straining his right hamstring for the third time this year against Essendon in round 16.

Cameron has played 10 of 17 matches alongside Hawkins in the Cats’ new-look attack this year, with coach Chris Scott assured his gun recruit’s fresh injury won’t extend beyond six weeks.

“We’re really confident he’ll play before the end of the home and away season and give him and us enough time to make sure he’s cherry ripe going into finals,” Scott said on Thursday.

“That would be the broad assumption of where he is in his rehab.”

The Cats are less optimistic on midfielder Mitch Duncan’s return date after he injured his PCL in the round 14 win over the Western Bulldogs and remains in a brace.

“(It’s a) bit harder to tell with Mitch whether he’ll come good before the home and away season but we’re supremely confident he’ll play this year. That might depend on us being good enough week to week.”

Scott said the Cats had quickly moved on after having their request to shift their home game against the reigning premiers from the MCG to GMHBA Stadium denied.

The AFL has since indicated a range of factors behind their decision in not moving the fixtured game including avoiding setting precedents after Essendon also had its round one request knocked back, commercial entitlements at the MCG and broadcast requirements in Geelong.

“I prefer to look at it more from the other side which is, when we’re in an environment where the AFL are in an impossible situation trying to manage everything, if this is an issue that slips down the priority list, I think all fair-minded people should be able to live with that and that includes us,” Scott said.

Scott also called on the AFL to explain their “ethical framework” when it came to venue decisions for finals as soon as this year.

Richmond will be without Dustin Martin for the remainder of the season after a nasty kidney injury (watch the incident in the player below), however, Scott said the Cats couldn’t fall into the trap of underestimating the Tigers missing the three-time Norm Smith medallist.

“Our suspicion is, given they’ve been so successful with a really structured plan and operation over the last few years, even though he’s the best player in the comp, there will be another really good player who comes in and plays a similar role to him,” Scott said.

“Or we could take a different view, which I think would be a mistake, and that is to assume that they’re going to be less potent without him. I think they’ve shown over a long period of time they can replace really, really high-level players with guys who can come in and do the job.”

Scott also confirmed Shaun Higgins, who will play his 250th match on Sunday, had been cleared of his staging fine stemming from the Cats’ win against Fremantle last week.